With hours of Nusrat Jahan posting a video and photos of her photo shoot for the ad, in which she is dressed as the goddess and holding a trishul (trident), threats started popping up on her timeline. 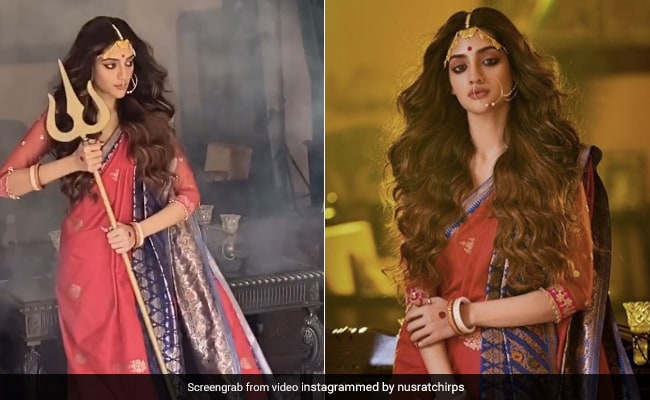 Trinamool Congress MP and film star Nusrat Jahan has received death threats on social media for dressing up as Goddess Durga for advertisements for a clothing line that she posted on Instagram on 17 September.

The actor left for London on September 27 for a film shoot but her office has alerted authorities.

"We have taken up the matter with the Bengal government and the Ministry of External Affairs, who are in turn coordinating with the Indian Embassy in London (UK), for protection, as an additional security measure," a close aide told NDTV.

"Ms Jahan has always stood for her secular and inclusive viewpoints and these trolls do not deter her," he added.

With hours of Ms Jahan posting a video and photos of her photo shoot for the ad, in which she is dressed as the goddess and holding a trishul (trident), threats started popping up on her timeline, from India and Bangladesh, according to sources.

This is not the first time Ms Jahan has been threatened and abused for her views or stand on issues. She was abused for marrying a Hindu, wearing 'sindoor' or vermillion and participating in rath yatra soon after. Photos of her at Durga Puja pandals last year with her husband had gone viral and drawn abuse.

Not just Ms Jahan, party colleague and fellow MP Mimi Chakraborty also faced abuse for playing the role of Goddess Durga for a dance drama on an entertainment channel to celebrate Mahalaya on September 17which is an auspicious day in Bengal's Durga Puja calendar.

A handful of critics reportedly slammed Ms Chakraborty for some tattoos on her arms that were reportedly visible during the performance as the goddess.

Ms Jahan had recently complained to the Cyber Cell of Kolkata Police about an unauthorised use of her photo by a video chat and dating app. No police complaint has been filed about the abuse flooding her Instagram account after her "Goddess Durga" photos yet.