Sukhbir Singh Badal, the Akali Dal chief, promptly responded: "Derek - your stand against the #AgricultureBills in parliament is well known. Appreciate your support." 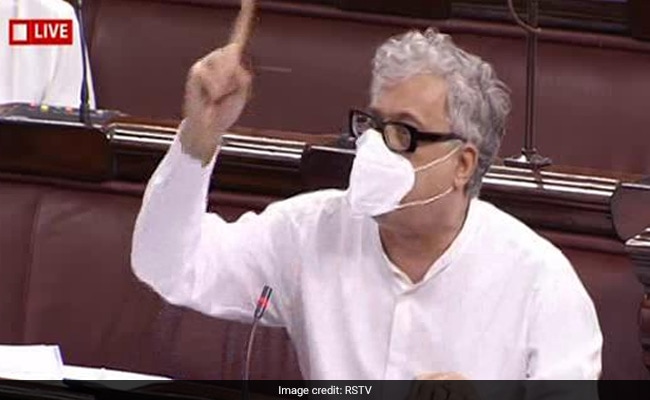 Last week, Derek O'Brien was accused of tearing a rule book as farm bills were passed.

Trinamool Congress MP Derek O'Brien, who was suspended from Rajya Sabha last week over "unruly behaviour" as the parliament cleared the contentious farm bills, this evening backed Akali Dal's decision to quit the NDA. The Shiromani Akali Dal, the oldest ally of the BJP, on Saturday said it was quitting the ruling BJP's National Democratic Alliance (NDA) after sharp differences over the three controversial farm sector bills amid widespread protests.

"We support @officeofssbadal @Akali_DaL's stand with the farmers. Fighting for farmers is part of Trinamool DNA. In 2006, @mamataofficial risked her life on a historic 26 day fast for farmers' rights. We oppose #FarmBills2020 as they endanger States' role, MSP, PDS & procurement (sic)," the Trinamool Congress leader wrote in a tweet.

Sukhbir Singh Badal, the Akali Dal chief, promptly responded: "Derek - your stand against the #AgricultureBills in parliament is well known. Appreciate your support."

Derek - your stand against the #AgricultureBills in parliament is well known. Appreciate your support.@derekobrienmphttps://t.co/PcvQ3mmPco

Last week, Derek O'Brien was accused of tearing a rule book and snatching off Rajya Sabha Deputy Chairman Harivansh Narayan's microphone when two of the three farm bills were tabled in the House amid fierce protest by the opposition parties.

Eight Rajya Sabha MPs, including the TMC leader, were later suspended; they held an overnight protest outside the parliament against the government. The Opposition boycotted the parliament session.

On Saturday, the SAD became the third major NDA member to pull out of the grouping after the Shiv Sena and the Telugu Desam Party (TDP). The party decided to pull out of the BJP-led NDA alliance over "centre's stubborn refusal to give statutory legislative guarantees to protect assured marketing of farmers crops on MSP".

The party, which initially supported the bills before realising the extent of discontent against them, counts a vast swathe of its voter base in farmers in Punjab who have vehemently opposed the new laws.

Akali Dal's Harsimrat Kaur Badal had quit as a union minister in Prime Minster Narendra Modi's cabinet about two weeks ago. Last night, she tweeted: "If pain & protests of 3 cr punjabis fail to melt the rigid stance of GoI (Government Of India), it's no longer the #NDA envisioned by Vajpayee ji & Badal sahab. An alliance that turns a deaf ear to its oldest ally & a blind eye to pleas of those who feed the nation is no longer in the interest of Pb, (sic)."