The eatery named, 'Manva Dhaba' (My Dhaba), was started in May in Bade Karli village on Geedam-Bijapur Road as part of livelihood generation activities carried out by the district administration. 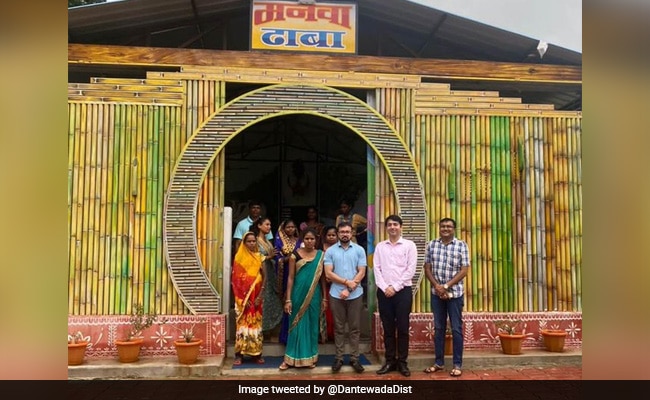 A group of tribal women in Chhattisgarh's Dantewada has taken up a path-breaking enterprise of operating an eatery in the region infamous for Maoist violence to ensure a sustainable livelihood for their families.

The eatery named, 'Manva Dhaba' (My Dhaba), was started in May in Bade Karli village on Geedam-Bijapur Road as part of livelihood generation activities carried out by the district administration at a gauthan (a shelter for cattle).

The district administration had provided funds under the District Mineral Foundation (DMF) to set up the eatery on 3,000 sq ft land next to the gauthan, 6 km from Geedam town, an official said.

The facility is managed by 10 women from 'Boss Bodin' self-help Group (SHG) associated with the gauthan, who were once confined to just household chores and farming activities, he said.

"Earlier, my family depended only on agriculture activities for livelihood. Since I joined this SHG, my self-confidence has grown. Our group had been earning good money through the cow dung procurement scheme and now the dhaba is making a good profit," said Archana Kurram, one of the members of the group.

The eatery, offering both vegetarian and non-vegetarian food, has become popular among locals in a short span of time, and on peak days, the sale reaches around Rs 20,000 per day, the district administration official said.

The eatery has so far done business worth Rs 8 lakh, and motivated by the success, the group now plans to start tiffin services soon, he said.

At present, each member of the group is earning Rs 5,000 to Rs 6,000 per month. This initiative has made women self-reliant and helped them contribute to their families' finances, the official said.

Talking to PTI, Dantewada collector Vinit Nadanwar said these tribal women have come together by breaking stereotypes and have taken up roles that were once dominated by men.

The concept was introduced as a part of Chief Minister Bhupesh Baghel's vision to develop gauthans into multi-activity centres and generate livelihood earning means for women SHGs associated with it, he said.

The initiative is not only helping women become self-reliant, but they are also playing an important role in improving the family economy, he added.

In gauthans, apart from cow dung procurement, several income-generating activities such as community vegetable gardening, vermicompost and super compost production are being conducted with the involvement of women SHGs, he said.