India claims that the CTBT is discriminatory because it favours "five nuclear weapon states"- the United States, United Kingdom, China, France and Russia - when it comes to fulfilling obligations for eliminating nuclear weapons. 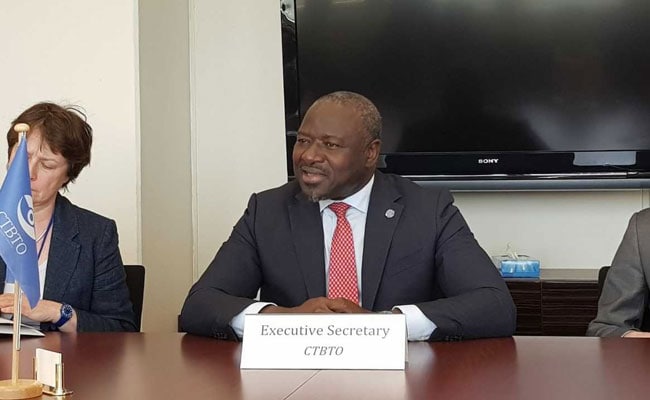 Lassina Zerbo said that becoming an Observer will give India a chance to see how the CTBTO works.

The Comprehensive Nuclear-Test-Ban Treaty Organisation (CTBTO) has invited India to become an "Observer" with access to International Monitoring System data, so it can take an informed decision on ratifying a much-debated nuclear disarmament treaty.

The CTBT is a global treaty that aims to ban all nuclear explosions across the world. In 1996, it was adopted by the United Nations General Assembly and opened for signature. Between 1945 and 1996, over 2,000 nuclear tests were carried out all over the world. Ten nuclear tests have been conducted ever since the CTBT opened for signature in 1996. Although 184 countries have signed the treaty so far, it is yet to come into force because eight countries with nuclear capabilities - including India - are yet to sign and ratify it.

India has claimed in the past  that the CTBT is discriminatory because it favours "five nuclear weapon states"- the United States, United Kingdom, China, France and Russia - when it comes to fulfilling obligations for eliminating nuclear weapons. Instead, it wanted the CTBT to have a clause on complete nuclear disarmament in a time-bound manner because there are technological differences between the 'have' and 'have not' countries. India was concerned about the likelihood of those already possessing nuclear weapons upgrading their arsenals through sub-critical and laboratory simulated testing.

Lassina Zerbo, the executive secretary of the Comprehensive Test Ban Treaty Organization (CTBTO), said, "I am not asking India to ratify the treaty. But it can become an Observer, allowing India to attend our meeting, see how CTBTO works, and take the time needed to make the decision."

He was addressing a group of Indian journalists at the CTBTO headquarters located in Vienna, the capital city of Austria, on May 10. Mr Zerbo said that he understands India's apprehensions, and would try his best to win the country's trust by addressing them.

The CTBTO runs the International Monitoring System or IMS, which can detect nuclear tests anywhere across the world.

"Being an observer would give India access to data from the International Monitoring System's 337 facilities located in 89 countries that monitor the planet for signs of nuclear explosions. This system can detect even small nuclear explosions using seismology, hydro-acoustics, infrasound and radionuclide technologies. Nowhere can you get this quality of data necessary for earthquake monitoring. The IMS also helps warn of tsunamis and volcanic ash, and identifies plane crash sites," said Mr Zerbo.

He recalled how the IMS had detected a low-magnitude, one-tonne yield nuclear test conducted by North Korea in 2006 even though only 50% of its capacity had been developed by then. The detection ability has become much higher now, given that the capacity has gone up to 90%, he added.

So, is the CTBTO proactive enough to bring India aboard after the failed talks in 1996? "A few years ago, a delegation was sent to Pakistan and India to offer them Observer status. While Pakistan accepted it, the delegation could not even meet the Indian authorities," said Mr Zerbo.

Upon being asked why the organisation was not putting pressure on countries like the United States and China to ratify the treaty, the CTBTO executive secretary said that Beijing was taking small steps in this direction. "Five IMS stations have been certified in China over the last 15 years. The US continues to be the biggest funder for the CTBTO, and has not cut funds at any point," he added.

For a start, Mr Zerbo has invited India to participate in the science and technology conference scheduled between June 24 and 28 in Vienna. The conference - which will bring together over 1,000 academics, scientists and CTBTO policy makers - will be addressed by former United Nations Secretary-General Ban Ki-moon on June 24.

"The conference aims to bring together countries that are not signatories to the CTBT. India can come and participate in scientific and technological discussions, where you can see what is up there and make a decision whether to join us as an Observer or not. That's all I am hoping for. A small step for a country like India would mean a huge (leap for the) international community," said Zerbo, who hails from Burkina Faso.

NDTV tried to contact Raveesh Kumar, official spokesperson and Joint Secretary of the Union Ministry of External Affairs, for his reaction to the CTBTO chief's statements but is yet to receive a response.