The Centre for Science and Environment study showed that higher levels of Potassium Bromate and Potassium Iodate were found in sandwich bread, pav, bun and white bread. (Representational Image)

New Delhi: The bread available in India could be laced with toxic chemicals that can lead to thyroid disorders and cancer, the non-profit Centre for Science and Environment, or CSE, said after conducting a series of tests. The Union health ministry has ordered an investigation into the matter.

"Just two slices of bread every day is enough to put us at a higher risk of thyroid and cancer," Chandra Bhushan, Deputy Director, CSE.

The organisation said it had picked 38 samples from outlets in Delhi and tested them for Potassium Bromate and Potassium Iodate. "More than 84% samples came out positive," said Mr Bhushan. High levels of chemicals were found in white bread and less in multi-grain breads.

Potassium Bromate and Potassium Iodate were used to treat flour meant for baking. But after warnings from the World Health Organisation, more than 40 countries -- including China and Sri Lanka -- have banned their use. These chemicals, however, are not banned in India.

Reacting to the CSE report, Health Minister JP Nadda said, "I have told my officials to report to me on an urgent basis. There is no need to panic. Very soon we will come out with the (probe) report."

On behalf of the bread industry, the All India Bread Manufacturers Association gave a statement, saying it was yet to see the CSE report. But it added that "Food safety and Standards Authority of India's regulations permit the use of Potassium Bromate and/or Potassium Iodate at 50 ppm Max for bread and at 20 ppm Max for Bakery purpose".

The same additive, the statement read, "is considered safe and is widely used in advanced countries like the US ".

A statement by Jubilant FoodWorks, which operates the Domino's brand, read, "The flour used by us is not treated with Potassium Bromate/Potassium Iodate." Britannia and Slice Of Italy too, denied the use of the chemicals.

According to the study, the products of Harvest Gold, Britannia and Perfect Bread had higher levels of the chemicals. 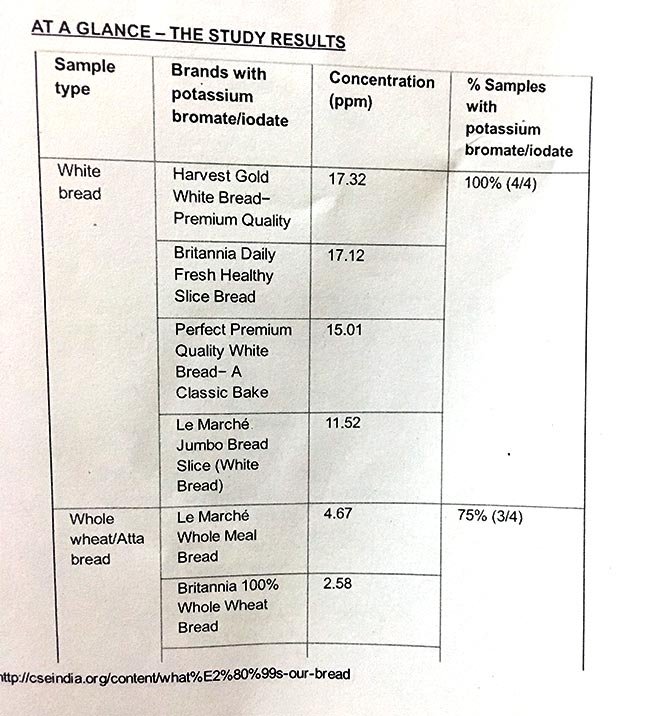