Till Late October, A Gandhi Film Every Week At Kolkata's Victoria Memorial 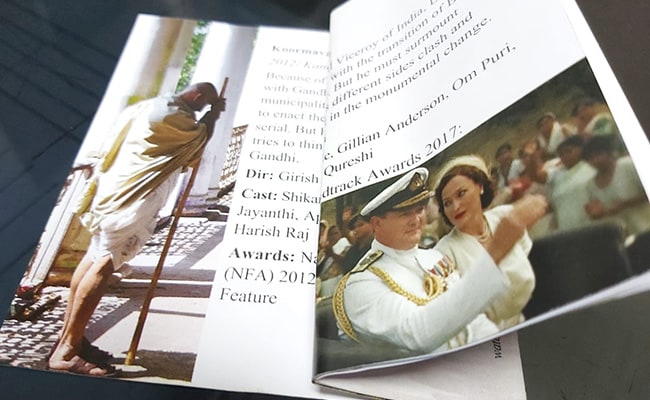 The "Gandhi Revisited Through Films" festival began on August 21.

There is no record of Mahatma Gandhi ever visiting Kolkata's iconic Victoria Memorial in his lifetime, nor of him saying anything about the monument. But now, nine thought-provoking feature films inspired by Mahatma Gandhi have come a-calling. On screen. To mark his 150th birth anniversary.

The festival, which began on August 21, will continue until October 25 with one film screening every Wednesday at 4:30 pm.

Curating this festival called "Gandhi Revisited Through Films" is award-winning critic Ratnottama Sengupta, who wanted to explore what Gandhi means to Indians today. "Is Gandhi only a face on the currency note? Or merely the high street in every Indian city?" she asks.

Are tolerance, non-violence and honesty forgotten hallmarks of moral fibre that Gandhi espoused? Besides ahimsa or non-violence, Gandhi spoke of ethics. Does India remember? "These are the questions I am hoping the nine films will raise and generate a fruitful discussion," Ms Sengupta said.

Girish Kasarvalli's 2011 award winner "Koormavatar" was the first film shown, an extraordinary tale about a clerk in a municipal office who looks so much like Gandhi that he is asked to play him in a teleserial. And the challenges he faces in that role echo Gandhi's challenges in pre-independent India - Partition, communal strains and political tensions.

Gurinder Chadha's "The Viceroy's House" will be screened next, followed by "Gandhi My Father" by Feroz Abbas Khan. A 2007 film starring Akshaye Khanna, Darshan Jariwala and Shefali Shah, it explores Gandhi's troubled relationship with his son, Harilal.

"Road to Sangam", a 2009 film, will be screened on September 11. Starring Paresh Rawal and Om Puri, it's about the transformation of Hasmat Ullah - a devout Muslim mechanic in post-Partition India - when he is entrusted with the task of repairing an old Ford V 8 that carried Gandhi's ashes to Triveni Sangam.

"Pavel" is a Bengali film about Kecho, a street urchin who is told that his father is MK Gandhi. But when he writes that in the school application form, he is dubbed a fraud. "Gauri Hari Dastan" is about a man by the same name who resorts to Satyagragha to demand recognition as a freedom fighter, but is ridiculed and dismissed in a manner that's very different from the impact Gandhi's Satyagraha had.

Shyam Benegal's "The Making of the Mahatma" is the oldest film being screened. He won a Special Jury award for it in 1996.

"Hey Ram", a movie by Kamal Hasaan that ran into some controversy because some felt believed it depicted Gandhi in a negative light, screens on October 16. The last one on the list is Jahnu Barua's "Maine Gandhi Ko Nahin Maara", starring Anupam Kher and Urmila Matondar.

On September 6, Victoria Memorial will host a panel discussion moderated by chief executive Dr Jayanta Sengupta on "Gandhi and the World", "The Khadi Revolution", "Kasturba Gandhi", "Truth as Weapon - Satyagraha" and "Harijans after Gandhi".