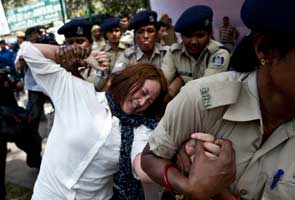 New Delhi: A group of Tibetans protesting Chinese president Hu Jintao's India visit unfurled a Tibetan flag near the five-star hotel where he was attending the BRICS summit.

Around 10 Tibetan activists unfurled the flag on a foot-over-bridge on San Martin Jose Road, less than a kilometre from Taj Palace where Hu Jintao was attending the summit along with Prime Minister Manmohan Singh and others.

After unfurling the flag, the activists tried to march towards the venue but were prevented by police from moving forward. They were taken into detention.

Yesterday, a group of Tibetans attempted to storm Oberoi Hotel where Hu Jintao is staying but were detained. Elaborate security arrangement was made in and around Taj Palace where over 2,000 police personnel were deployed.

Promoted
Listen to the latest songs, only on JioSaavn.com
The official said that the floors above and below the suites, where these leaders will be staying have been kept vacant.