"Those With Approach Get Priority For Transfer," Says Rajasthan Minister

Kalicharan Saraf made the remark while hearing a plea by a government worker seeking a transfer. 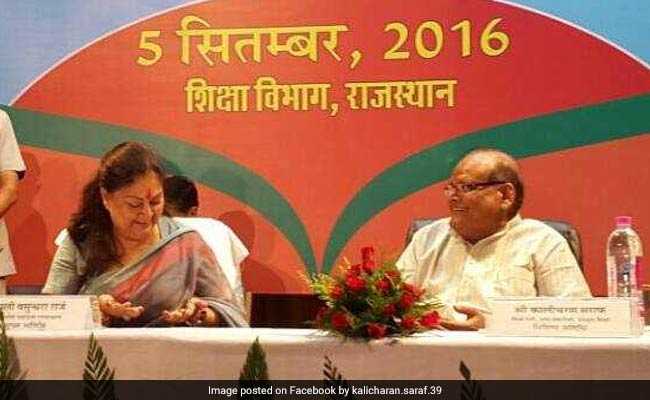 Days after two Rajasthan ministers reportedly had a heated argument over transfer of government employees, a remark by the state's health minister has led to more embarrassment for the Vasundhara Raje government.

A video clip now shows Health Minister Kalicharan Saraf virtually admitting that employees who have connections with influential people are more likely to be transferred to posts of their choice.

Those who have "approach" are given priority, he is heard saying in a clip purportedly of a meeting in Bharatpur where he was hearing people's grievances.

Mr Saraf made the remark while hearing a plea by a government worker seeking a transfer. He said people without "approach" are considered "weak links."

The Health Minister was not available for comment on the video clip which is seen on social media.

Mr Saraf's remark has drawn flak from the Opposition with state Congress chief Sachin Pilot saying that the BJP has "institutionalised" corruption and a transfer racket was operating in the state.

"Government employees and officers who do not have resources and approach are being exploited by the government," Mr Pilot said.

He alleged the transfers are being made to benefit the relatives of BJP leaders and those known to them.

A few days ago, Education Minister Vasudev Devnani and Minister of State for Health Banshidhar Bajiya had argued over the transfer of some teachers.

Mr Devnani had turned down Bajiya's recommendation for the transfer of some teachers sources said.