"I Told Them I Will Die As A Proud Indian": Madhubala Mondal To NDTV

The trauma and horror Madhubala Mondal went through over the past three years is not her story alone. There may be many more men and women in detention camps who, if their cases were properly investigated, will be able to prove they are, in fact, Indian 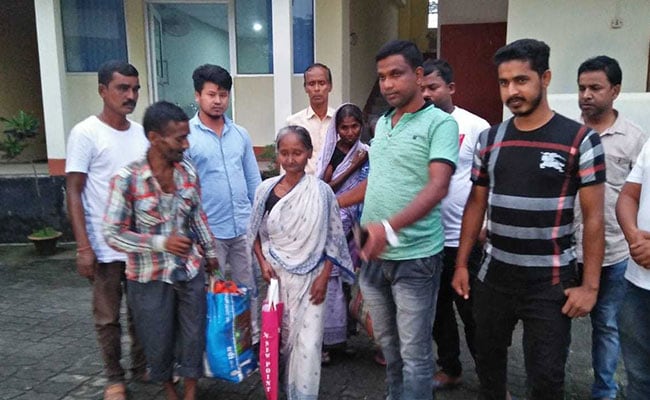 Madhubala Mondal, 59, her daughter Pholmala, 34, and granddaughter Jayanti, 12 are all in the draft NRC

The monsoons may have brought rains to Assam but the shines brightly for a family of three in Bishnupur village in the state's Chirang district. It was an emotional homecoming for 59-year-old Madhubala Mondal, who met her daughter and grand-daughter for the first time since she was held at the Kokrajhar Detention Centre three years ago.

In 2016, in another shocking case of mistaken identity, Assam police branded Madhubala Mondal a "foreigner" and arrested her; they were really looking for Madhumala Das, who lived in the same village but died at least 20 years ago.

The police have finally accepted they arrested the wrong person.

"They had come looking for Madhumala Das. I told them that I am Madhubala and not Madhumala, that I am Mondal and not Das, but they did not listen to me and took me away. I languished in detention for three years," Madhubala Mondal told NDTV.

Madhubala, a widow for 22 years, is the sole earner in her family, which consists of her daughter Pholmala, 34, and granddaughter Jayanti, 12. Pholmala, who cannot speak or her, was abandoned by her husband eight years ago.

The three live in a rickety hut, every inch of which speaks of the poverty and helplessness in their lives.

"Life inside detention centre is terrible. There are hundreds of people. What we got there was inhuman. I had left all hopes of my release and thought how will by daughter and granddaughter survive without me," Madhubala said.

"They gave us vegetables, sometimes with rice and dal, all half-cooked. There are so many people, young and old like me, who are Indian. I saw two people die there waiting for release," she added.

While Madhubala was detained, life was difficult for Pholmala and Jayanti. Fortunately a few villagers stood by them.

"The granddaughter dropped out of school. We got her admitted once again. The daughter is already deaf and dumb, and she also went into a trauma. She used to roam around the village looking for her mother. I used to get hold of both the daughter and granddaughter and feed them," Basani Mondal, a neighbor, said.

With no money and hampered by illiteracy it was not possible for either the family or the villagers to fight for Madhubala's release until a local activist, Ajoy Kumar Roy, stepped in, gathered proof and raised an alarm.

"I gave all the proof to the SP of police and told him 'for once come to the village and investigate the truth'. When the Sanaullah case surfaced and he was released I also involved the local media to create a buzz," Mr Roy told NDTV.

The irony is that Madhubala, Pholmala and Jayanti have all made it the draft version of the NRC.

"We investigated and found that it was a case of mistaken identity, so we sent a report to the court with our finding and she was released," Chirang's Superintendent of Police, Sudhakar Singh, said.

Assam police's mistake comes less than a month after retired Indian Army solider Mohammad Sanaullah was declared an illegal immigrant and detained for 12 days. He was released after it was discovered that the investigating officer, Chandramal Das, blamed a mix-up of reports for his arrest.

The trauma and horror Madhubala Mondal went through over the past three years is not her story alone. There may be many more men and women in detention camps who, if their cases were properly investigated, will be able to prove they are, in fact, Indian.

"This wrong detention has ruined my family, my health. How will I survive now that I can't even work? I need compensation from the government. They can't compensate the trauma and detention. They told me I am Bangladeshi and will be sent to Bangladesh. I told them I will die as a proud Indian," a tearful and defiant Madhubala said.