India has hit out at Pakistan for the way it treated the wife and mother of Kulbhushan Jadhav, the Indian man sentenced to death by a Pakistani military court on charges of spying. They were allowed to meet Mr Jadhav for 45 minutes across a glass screen on Monday in Islamabad. 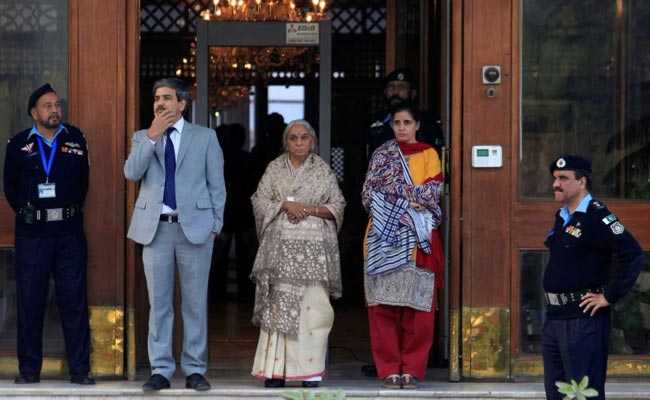 Islamabad/ New Delhi: Responding to allegations by a furious India, Pakistan today said it had "confiscated" the shoes of Kulbhushan Jadhav's wife because "there was something metallic in it". The shoes have been sent for forensic examination to establish the "nature of the suspected presence of a foreign object", said the Pakistani media quoting an official.

India has hit out at Pakistan for the way it treated the wife and mother of Kulbhushan Jadhav, sentenced to death by a Pakistani military court on charges of spying. They were allowed to meet Mr Jadhav for 40 minutes across a glass screen on Monday in Islamabad.

New Delhi has accused Pakistani officials of taking away the shoes of Mr Jadhav's wife Chetankul and not returning them "for some inexplicable reason, despite her repeated requests".

Pakistani media has quoted foreign office spokesperson Mohammad Faisal as saying: "The authorities are ascertaining whether the 'metallic object' in the shoes was a camera or a recording chip."

Mr Faisal also claimed Mr Jadhav's wife had been provided replacement shoes and all her jewellery was returned to her.

In a statement last night, Pakistan had made no mention of any "metallic substance" and had only said there was "something" in the shoes.

India has accused Pakistan of violating the mutual agreement on the Jadhav family visit and has also said Mr Jadhav appeared coerced and "under considerable stress" during the tightly-controlled interaction.

Mr Jadhav, meeting his family eight months after being sentenced to death, sat behind a glass screen and spoke through the intercom.

On India's strong objections, Pakistan's Foreign Office said the country "does not wish to indulge in a meaningless battle of words".

It said: "If Indian concerns were serious, the guests or the Indian Deputy High Commissioner should have raised them during the visit, with the media, which was readily available, but at a safe distance, as requested by India."

Promoted
Listen to the latest songs, only on JioSaavn.com
Mr Jadhav was arrested last year in Pakistan and accused of spying - which India has strongly refuted. New Delhi has said Mr Jadhav was kidnapped in Iran where he had legitimate business interests.

In May, the World Court ordered Pakistan to halt his execution.