The UNSC virtual meeting on Syria Chemical Weapons was India's first open meeting in the Council as the country began its tenure as non-permanent member for the 2021-22 term. 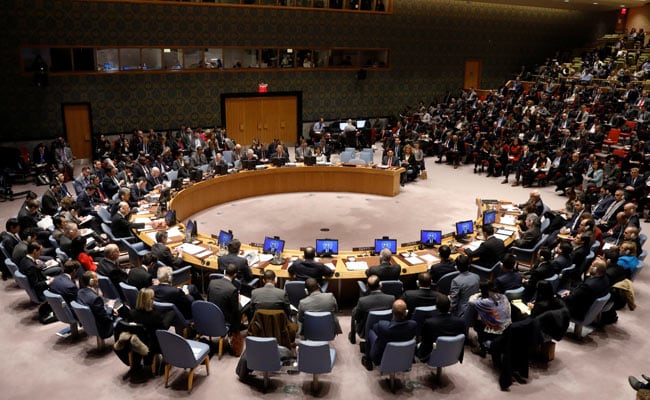 India on Tuesday told the UN Security Council that terror groups have taken advantage of the decade-long conflict in Syria to entrench themselves and pose a threat to the entire region, asserting that the world cannot afford to give these terrorists any sanctuary or dilute its fight against them.

India's Permanent Representative to the UN Ambassador TS Tirumurti, speaking at the UNSC meeting on Syria Chemical Weapons, said: "India remains concerned about the possibility of such weapons falling into the hands of terrorist organisations and individuals".

The UNSC virtual meeting on Syria Chemical Weapons was India's first open meeting in the Council as the country began its tenure as non-permanent member for the 2021-22 term.

"Any concerns should be addressed on the basis of consultation among all concerned parties. In our view, politicisation of the issue is neither helpful nor productive," he said.

Mr Tirumurti also underlined that India attaches high importance to the Chemical Weapons Convention, which is a unique, non-discriminatory disarmament instrument and serves as a model for the elimination of an entire category of weapons of mass destruction.

The 15-nation Security Council considered the latest report on the activities of the Organisation for the Prohibition of Chemical Weapons (OPCW) in implementing Security Council resolution 2118 (2013) and the relevant provisions of the OPCW Executive Council decisions in relation to the elimination of the Syrian chemical weapons programme.

Through the resolution, the Security Council had called for the full implementation of the decision of the OPCW Executive Council, which contains special procedures for the expeditious and verifiable destruction of Syria's chemical weapons.

Mr Tirumurti said India has consistently called for a comprehensive and peaceful resolution of the Syrian conflict through a Syrian-led dialogue, taking into account the legitimate aspirations of the people of Syria.

He noted that India has also contributed to the return of normalcy and rebuilding of Syria through humanitarian assistance and human resource development.

Mr Tirumurti voiced India's appreciation for the commitment of the OPCW Technical Secretariat in performing its responsibilities during the challenging times of the pandemic. India has taken note of the findings mentioned in the two recent reports of the OPCW Fact-Finding Mission in Syria.

He said India also takes note that OPCW is in the process of analysing the information collected from its most recent deployments for cases related to the alleged use of chemical weapons in Syria.

"We note with satisfaction that three issues relating to Syria's initial declaration have been resolved during the last six months," he said.

India encouraged continued engagement and cooperation between Syria and the OPCW Technical Secretariat towards an early resolution of all outstanding issues.

India has provided a financial contribution of one million dollars to the OPCW Trust Fund for activities relating to destruction of chemical stockpiles and related facilities in Syria.

Mr Tirumurti also voiced support for both the Geneva and the Astana processes for an expeditious resolution of conflict in Syria.