External Affairs Minister S Jaishankar also pressed for a permanent and comprehensive ceasefire in Afghanistan to ensure immediate reduction in violence and protection of civilian lives. 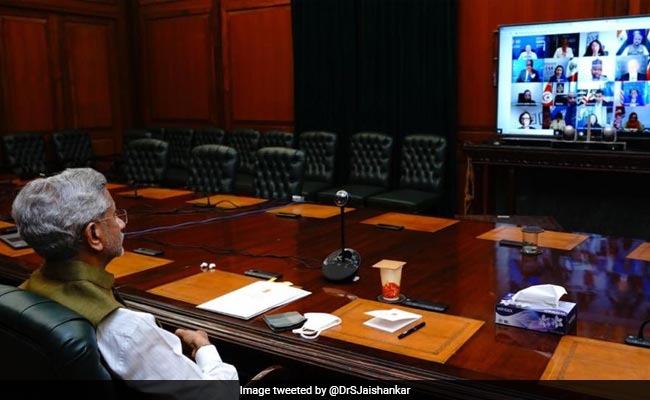 India has been a major stakeholder in the peace and stability of Afghanistan.

A durable peace in Afghanistan requires a genuine "double peace" both within and around the country, External Affairs Minister S Jaishankar told the UN Security Council on Tuesday as he asserted the need for "zero tolerance" for terrorism including cross-border terror.

During a UN Security Council debate on the UN Assistance Mission in Afghanistan, Jaishankar also pressed for a permanent and comprehensive ceasefire in the war-torn nation to ensure immediate reduction in violence and protection of civilian lives.

"A durable peace in Afghanistan requires a genuine double peace. That is, peace within Afghanistan and peace around Afghanistan. It requires harmonising the interests of all, both within and around that country," he said.

"For enduring peace in Afghanistan, terrorist safe havens and sanctuaries must be dismantled immediately and terrorist supply chains disrupted. There needs to be zero tolerance for terrorism in all its forms and manifestations including its cross-border one," he said in an apparent reference to Pakistan.

"It is equally important to ensure that the territory of Afghanistan is not used by terrorist groups to threaten or attack any other country. Those providing material and financial support to terrorist entities must be held accountable," he added.

Referring to last week's report of UN Secretary General Antonio Guterres on the situation in Afghanistan, Mr Jaishankar said the report is clear that intra-Afghan talks have not resulted in a reduction of violence in Afghanistan. But on the contrary, violence has only increased, especially after May 1 as the country has been witnessing targeted attacks on religious and ethnic minorities, girl students, Afghan security forces, Ulemas, women occupying positions of responsibility, journalists, civil rights activists and youth.

"It is therefore crucial that the international community and, in particular, this Council presses for a permanent and comprehensive ceasefire to ensure immediate reduction in violence and protection of civilian lives," he said.

The UNSG's report noted that the security situation in Afghanistan "continued to deteriorate". Between February 12 and May 15, the United Nations recorded 6,827 security-related incidents, a 26.3 per cent increase from the 5,407 recorded during the same period in 2020, it said.

India has been supportive of all the efforts being made to accelerate the dialogue between the Afghan government and the Taliban, including the intra-Afghan negotiations, Mr Jaishankar said.

If the peace process is to be successful, then it is necessary to ensure that the negotiating parties continue to engage in good faith, eschew the path to find a military solution, and fully commit towards reaching a political solution, he said, adding that a tangible demonstration of this commitment is required.

"India welcomes any move towards a genuine political settlement and a comprehensive and permanent ceasefire in Afghanistan. We support a leading role for the United Nations, since that would help improve the odds for a lasting and durable outcome," he said.

"I would like to reiterate our support for an inclusive, Afghan-led, Afghan-owned and Afghan-controlled peace process. Any political settlement in Afghanistan must ensure that the gains of the last two decades are protected, and not reversed," he added.

It should, therefore, preserve the constitutional democratic framework and ensure the protection of rights of women, children and minorities, he said.

The Taliban and the Afghan government are holding direct talks to end 19 years of war that has killed tens of thousands of people and ravaged various parts of the country.

The intra-Afghan began as the US and the Taliban signed a landmark deal in Doha on February 29, 2020 following multiple rounds of negotiations to bring lasting peace in war-torn Afghanistan and allow US troops to return home, effectively drawing curtains on America's longest war.

India has been a major stakeholder in the peace and stability of Afghanistan. It has already invested close to USD three billion in aid and reconstruction activities in the country.

Mr Jaishankar underscored that India continues to stand with Afghanistan in ensuring restoration of normalcy through a legitimate democratic process that is essential for the long-term stability of Afghanistan and the region.

India will continue to provide all support to the Government and people of Afghanistan in realizing their aspirations for a peaceful, democratic and prosperous future, free of terror, so as to protect and promote the rights and interests of all sections of Afghan society, he said.

He noted that for Afghanistan's economic development, it is also important to have unhindered access to the high seas.

Mr Jaishankar said the international community should work towards the removal of artificial transit barriers imposed on Afghanistan and ensure full transit rights guaranteed to Afghanistan under bilateral and multilateral transit agreements without any hindrance.

India remains committed to steadfastly supporting Afghanistan during its transition. Our development partnership, including more than 550 Community Development Projects covering all 34 provinces, is aimed at making Afghanistan a self-sustaining nation, he said.

Additionally, India has recently signed a Memorandum of Understanding with the Government of Afghanistan for building the Shatoot dam, which would provide safe drinking water to the residents of Kabul city, he added.

Providing greater regional connectivity, India has operationalised air freight corridors and the Chabahar Port, through which India extended humanitarian assistance of 75,000 MT of wheat to Afghanistan to overcome food insecurity in the country in view of the COVID-19 pandemic, he said.

As part of New Delhi's endeavour to help Kabul tide over the COVID-19 pandemic, India has supplied Made-in-India vaccines to Afghanistan, both bilaterally and through the COVAX facility, he said.