The video - posted on Twitter by the RJD's youth wing - shows Tejashwi Yadav distributing three Rs 500 notes to three women while sitting in his car, a SUV 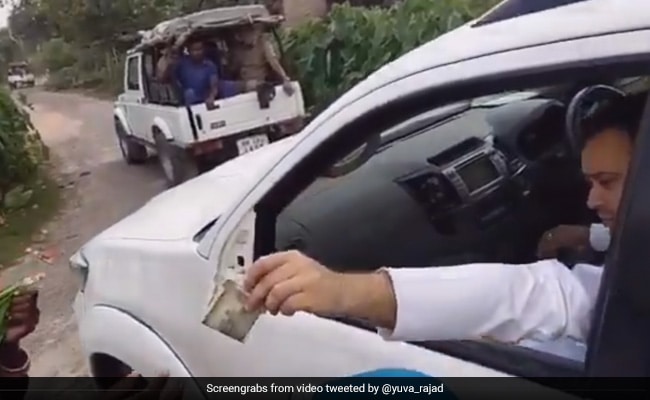 A video of RJD leader Tejashwi Yadav distributing cash - Rs 500 - to three women in Bihar's Gopalganj district, while an off-camera voice reminds the women he is "Laluji (Prasad Yadav) ka beta" has led to barbed comments from the ruling Janata Dal (United).

The video - posted on Twitter by the Rashtriya Janata Dal's youth wing, Yuva RJD - shows Mr Yadav distributing three Rs 500 notes to the women - one for each woman - while sitting in his car, a SUV.

They receive the notes with uncertain smiles on their faces, thanking Mr Yadav as they do.

After receiving the money they then fold their hands in respect and stand by the side of the car while the person filming the video tells them "Tejashwi Yadav.... Laluji ka beta... Laluji ka beta" after which one of three - an older woman in a blue saree - reaches into the car to bless Mr Yadav.

JDU MLA Neeraj Kumar was among those to hit out at the video; the former Information Minister accused Mr Yadav of arrogance and took a swipe at him over his father and RJD founder Lalu Prasad Yadav, who was granted bail in April in the fodder scam cases.

"Nobody knows him.... who is this arrogant prince? The difference between rich and poor is clear....Somebody calls him "Laluji ka beta (son of Lalu)"... but what was the past is not the present. Go son, create an identity for yourself, remove the money launderer stain," he wrote.

A tweet from Mr Yadav's handle provided further details of yesterday's visit - to address a meeting on the 10th death anniversary of former MLA Devdutt Prasad in Gopalganj's Baikunthpur.

At the meeting Mr Yadav - who led his party to an impressive haul of 75 seats in last year's Assembly election, and dragged the Congress-RJD alliance to within 15 seats of victory - slammed the "double-engine" claim of the ruling BJP-JDU government.

"'Double engine' is 'trouble engine' for Bihar... the youth, the students, the farmers, the poor, the teachers and the businessmen are all suffering under this government. Inflation, unemployment, bureaucracy and corruption are at its peak," Mr Yadav declared.

"The Nitish Kumar government... is incapable of discharging constitutional duties and responsibilities. it does not want to talk about promises made (before) the elections. They have cheated the public... so there is huge resentment against the NDA," he added.

The JDU's swipes at Tejashwi Yadav come amid speculation about a political realignment in Bihar following a meeting between the RJD leader and Lok Janshakti Party MP Chirag Paswan.

Mr Paswan visited Mr Yadav in Patna this week to invite him to a memorial event for his father and former Union Minister Ram Vilas Paswan, whose first death anniversary is on Sunday.

While both stressed their fathers' close ties with each other, they refused to respond to questions about a formal collaboration. They did, however, jointly targeted Chief Minister Nitish Kumar.