The advertisement, which featured an interfaith baby shower was pulled off on Tuesday after it was targeted by a section on social media who felt it "promoted love jihad". 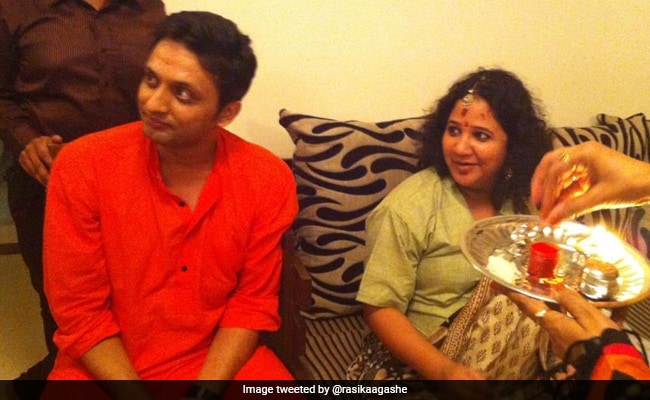 Titan's jewellery brand Tanishq, which has withdrawn an advertisement featuring a Hindu-Muslim couple and their families after vicious trolling, has received support on social media from users who have shared their experiences of being in a multicultural marriage.

"Before crying out love jihad, lets learn about the Special Marriage Act," the actor-director said while sharing a six-year-old photo which shows Ms Agashe sitting next to Zeeshan Ayyub during the rituals.

Actor Mini Mathur -- in an Instagram post calling for an end to the 'hate' - also shared her experience of being married to Bollywood director Kabir Khan. "This and even more love is what I have received in my multicultural marriage," she wrote.

Twitter user Zara Farooqui shared a series of pictures of her wedding with her husband Nikhil Parwal. "'What if" religions were changed," Ms Farooqui said in her tweet addressed to "bigots".

This is for @TanishqJewelry and #bigots who called for #BoycottTanishq and have questioned “what if” religions were changed.
So here goes, my maiden name is Zara Farooqui and I am married to Nikhil Parwal @NikZar05 since 2016. And these are our wedding pics. #TanishqAdpic.twitter.com/PV2dQScFPJ

Another user, Griha Atul, said that Tanishq advertisement was based on realities of many like her, whose religious identity is respected and accepted by her Muslim in-laws.

"I'm married into a Muslim household which respects and accepts my religious identity. So the Tanishq advert wasn't a figment of any imagination. It's a reality of our times that's deliberately being negated by fascist forces," she tweeted.

My two bits on the controversy raging around the #TanishqAd
Also P. S. Ours' is a marriage and it's not perfect. We still fight over dishes not done and गीला towel bed पे! We are no aliens bro! Quit making us feel so special... by doing अरे हिंदू मुस्लिम or #interfaithpic.twitter.com/psLQKvkVoA

Another couple, who have been married for 44 years, shared their story as well. Years of struggle later, the couple say that they have now found peace and are a family of four. They have named their house in Goa "Hum" in Hindi, where H stands for Hindu and M for Muslim.

The advertisement, which featured an interfaith baby shower was pulled off on Tuesday after it was targeted by a section on social media who felt it "promoted love jihad".

The country's top advertising bodies have come out in support of the Tanishq advertisement, which, it said, breaks no ethical standards and isn't derogatory to any individual, organisation or religion. "Such baseless and irrelevant attack on creative expression is extremely concerning," The Advertising Club said in a statement.

Under intense troll on social media, the company said it was pulling the advertisement keeping in mind the well-being of its employees, partners and store staff.

"The idea behind the Ekavatam campaign is to celebrate the coming together of people from different walks of life, local communities and families during these challenging times and celebrate the beauty of oneness. This film has stimulated divergent and severe reactions, contrary to its very objective," the company had said in its statements.