Tamil Nadu Village Gets Toilets, Thanks To A 16-Year-Old Girl

When a non-government organisation came forward to help Jayalakshmi in Tamil Nadu's village fulfill her dream of going to the NASA facility in the US, she refused the offer and instead asked it to help her village by building toilets.

Jayalakshmi is the sole earner of her family living in Adhanakottai village in Tamil Nadu's Pudukottai.

Devi Arivalagan, a resident of a village in Tamil Nadu, said for years she and her family had to walk for around a kilometer towards a forest area for defecation. But now, thanks to a teenage girl in their village, that no longer is an issue.

When she won an online competition last year to visit the NASA facility in the US, help poured in with funds from various sectors for Jayalakshmi -- a 16-year-old studying in Class 12 in Adhanakottai village of Tamil Nadu's Pudukottai district.

The girl is the sole earner of her family which includes a mentally-disabled mother and a younger brother.

However, after securing a sufficient amount to realise her dream, the girl turned down an offer from a non-government organisation and instead asked it to help her village which was facing the problem of open-defecation since many years.

The Non-Government Organisation (NGO), Gramalaya, immediately took up her plea and set to work.

It asked each family to lay a simple foundation for the toilet at their house and provide sand for construction. The villagers, mostly working as farm labourers, helped in the construction to save money.

The organisation spent around Rs 20,000 each to build toilets for over 125 families living in the village.

"I always thought after I secure a job I should do something for my district Pudukottai, and state Tamil Nadu. Now through Gramalaya, I have done it," Jayalakshmi said. 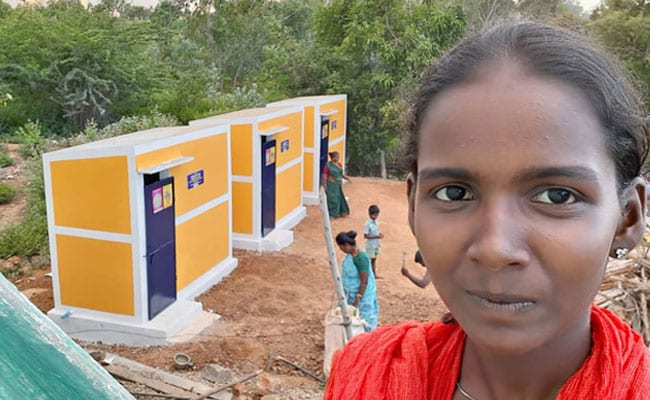 The girl is the sole earner of her family.

Devi Arivalagan said: "Now, our next generation, our daughter, need not go to another place kilometres away."

A student, Eswari, said the toilets have also helped keep girls of the village safe. "On the way (to the forest), there is a government liquor shop. They stared at us, and often young girls returned without defecation. The whole day, they suffered from stomach aches and other problems," she said.

Villagers said apart from solving the problem of health and hygiene, it helped them save time to focus on their work too, which is peeling and selling cashews.

CEO and Founder of Gramalaya, Damodaran, said: "When we were ready to support her (Jayalakshmi's) travel cost to the US, instead of accepting our support, she requested Gramalaya to build toilets for all houses in the village. That inspired us."

Jayalakshmi is a class topper and wants to become an IAS officer and help fulfill her younger brother's dreams as well. She also helps other students through a youth network, Puratchi Vidhaigal. Due to the ongoing pandemic, her trip to the US has been postponed to next year.