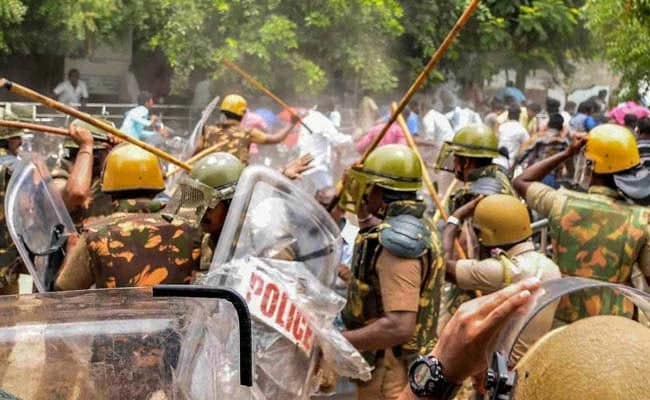 In Tuticorin, most shops and commercial establishments were shut today.

He said 102 persons were injured, 19 of them seriously.

10 women were among the 34 police personnel who were injured, he said, adding, they were undergoing treatment at hospitals.

Most shops and commercial establishments were shut for the third consecutive day today after violence broke out on May 22.

A top state official, Gagandeep Singh Bedi, who is here along with his senior colleagues from Chennai, said talks were held with associations for merchants, boat owners, hotels, and labourers, among others, to elicit their views and bring back normalcy.

He said top state and district officials, senior police officials and district police superintendent Murali Rambha were part of the deliberations with stakeholders.

Mr Nanduri told reporters that the government does not want the Sterlite unit to operate.

"Your (people's) main demand is already met, so please co-operate to restore normalcy," he said in his appeal to people.

Both power and water supply to the Sterlite unit has been disconnected, he said.

Post-mortem has been completed on six bodies. The bodies would be preserved as per the Madras High Court orders, he said.

Giving details about damage to property, he said "totally, Rs 1.27 crore is the value of damage to vehicles."

As many as 35 cars and 11 motorcycles got damaged and its value alone was Rs 36 lakh.

The vehicles include both government and private ones.

Apart from vehicles, damage to property in the district collectorate complex was Rs 29 lakh, he said.

Based on feedback, several steps were being taken to restore normalcy, he said.

As regards the corporation area "we are still assessing the situation, we are taking feedback from police authorities."

Promoted
Listen to the latest songs, only on JioSaavn.com
"Tomorrow too we want to just assess the situation to be on the safer side. We are ready to ply the buses, tomorrow we will decide."

Asked who authorised firing by police, PWC Davidar, additional chief secretary, said the inquiry commission would look into the matter.