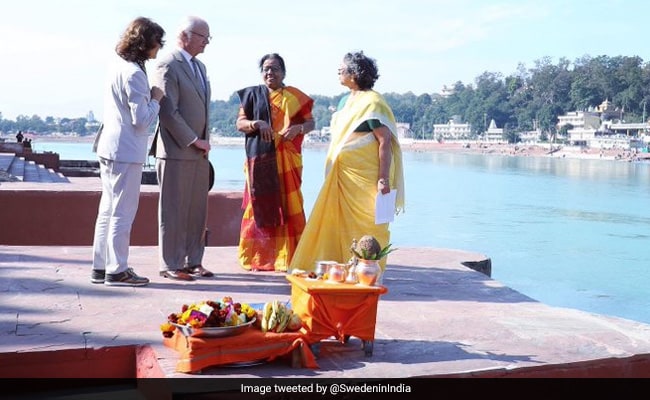 Ms Pandey was among the 16 children, including teenage environment activist Greta Thunberg, who had filed a complaint to protest the lack of government action on the climate crisis at the United Nations Climate Action Summit in September.

Sharing details of her meeting with the royal couple, Ms Pandey said she told them about the ongoing Union government campaigns to save the environment and the lack of awareness among people about their significance.

"I told the royal couple about campaigns like Swachh Bharat Mission and the one to stop the use of single-use plastic and how due to a lack of awareness, these campaigns had not produced the desired results," she said.

The Swedish king said he understood what the children wanted to say, Ms Pandey said when asked how the king reacted to what they said.

The royal couple observed how the Ganga is worshipped at the Ganga Mandir ghat in the Swargashram area.

The "Ganga puja" was performed by two women from Nagpur--Shashi Tripathi and Daya Vyaghra.

The couple also took a small walk on the Ram Jhula before leaving for Haridwar, where they were to attend the inauguration of a sewage treatment plant.