Suvendu Adhikari first quit the post in Mamata Banerjee's ministry as a warning. Later he joined the BJP. 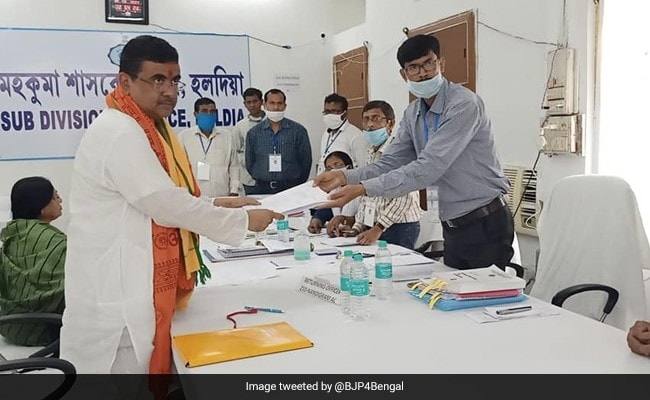 Suvendu Adhikari -- friend-turned-bitter foe of Bengal Chief Minister Mamata Banerjee -- rarely made national headlines when he was with the Trinamool Congress. But his exit from the party, induction in the BJP and now the face-off with Ms Banerjee from Nandigram, have suddenly made him a household name, especially with the buzz over in the coming elections in the state.

A minister in Mamata Banerjee's government handling transport and irrigation, Mr Adhikari walked out of the party in December. Insiders said the 50-year-old -- seen as one of the leaders with a most promising career -- was hugely upset since the induction and rapid rise of Abhishek Banerjee, the nephew of the Chief Minister.

Several leaders before Mr Adhikari had trod the same road. The first of them was Mukul Roy, who was considered the closest confidant, troubleshooter and political advisor of Mamata Banerjee. Many considered him one of the party's keenest strategists.

Trinamool shrugged off Mukul Roy's exit as the self-preserving manoeuvre of a leader accused in several cases. In case of Mr Adhikari, the party branded him an opportunist.

Party insiders, however, admit off the record that the exit of Mr Adhikari may pinch, especially in his stronghold that lies across four districts and 30-plus seats.

Mr Adhikari, the son of veteran political leader and three-time MP Sishir Adhikari, has influence over Jangalmahal -- the forested area in the western part of the state that was once a Maoist hotbed.

From his home turf of East Midnapore, his influence stretched across West Midnapur, Bankura and Purulia an area that accounts for 63 assembly seats.

Mr Adhikari had made his disapproval clear before he quit, vocally opposing the role given to poll strategist Prashant Kishor ahead of elections.

Mr Kishor's advent had created expectations that his presence would help smooth the path of Abhishek Banerjee to the top job in future.

Mr Adhikari first quit the post in Mamata Banerjee's ministry as a warning. Later he joined the BJP, which, with 200 seats as target, is fighting tooth and nails to unseat Mamata Banerjee.

That their battleground would be Nandigram was expected. Mr Adhikari had won the seat for the party in 2016.

But he is also seen as the architect of the huge build-up the party had got in the area with the anti-land acquisition movement that started in 2007. When Ms Banerjee won the 2011 assembly elections, bringing the 35-year-old Left citadel crashing, Nandigram was seen as the tinderbox.

With her streetfighter credentials, Mamata Banerjee was not ready to leave the field to him. Within days, she announced her candidature, withdrawing from Kolkata's Bhowanipur, seen as a safe seat.

Mr Adhikari is not pulling punches. While his followers have declared Ms Banerjee an "outsider" in Nandigram and him the son of the soil, today he accused Ms Banerjee of suppressing facts about six cases against her in her election affidavit.

At a programme held in Nandigram in memory of the martyrs of 2007, he labelled Ms Banerjee an "opportunist" as well, saying, "Fourteen people were martyred in police firing in 2007. I have been coming here every year since 2008 to pay tribute to the sacrifices made by the people of Nandigram. Whether it is an election season or not, it hardly matters to me, unlike the opportunists who are now coming to this place".