Sushma Swaraj had promised senior lawyer Harish Salve a "one-rupee" salary for representing India at the International Court of Justice in the case involving Kulbhushan Jadhav, 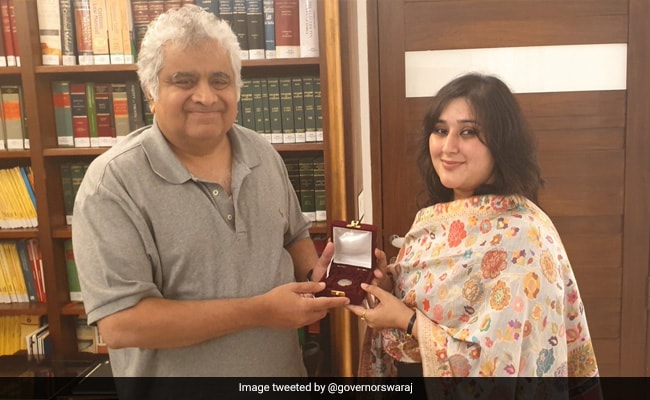 Moments before former Foreign Minister Sushma Swaraj suffered a fatal cardiac arrest and was taken to hospital, she had a light-hearted conversation with senior lawyer Harish Salve, during which she asked him to "come and collect his fee of Re 1" for representing India at the International Court of Justice in the case involving Kulbhushan Jadhav, a former officer on death row in Pakistan. On Friday, Sushma Swaraj's daughter fulfilled that promise.

In a touching tweet, Sushma Swaraj's husband Swaraj Kaushal, the former governor of Mizoram, tweeted that their daughter Bansuri Swaraj visited Mr Salve on Friday and presented him with a one-rupee coin.

@sushmaswaraj Bansuri has fulfilled your last wish. She called on Mr.Harish Salve and presented the One Rupee coin that you left as fees for Kulbhushan Jadhav's case. pic.twitter.com/eyBtyWCSUD

Harish Salve had shared the phone conversation he had on the evening of August 6 with Sushma Swaraj, who, as Foreign Minister in Prime Minister Narendra Modi's first term, led India's diplomatic efforts to save Jadhav.

"She was sounding very cheerful and she was very happy. She was asking me why I haven't come and met her on this visit. I said I will come and meet her today. She said you have to come because I have to pay your fees. You commented somewhere that even that one rupee has not been paid so I have to give that one rupee for Jadhav's case," Harish Salve told NDTV.

"She was in a very cheerful mood and said I nowadays work in my daughter's office. I was to meet her today at 6 pm. I was so shocked, 10 minutes later she had a cardiac arrest," he said,

Significantly, the last photo she tweeted was with Jadhav's family on July 25.

Kulbhushan Jadhav's family came to see me today. I wish them all the best. pic.twitter.com/CaXYaDXAUH

"(She leaves) a huge gap in Indian politics. She was an old generation politician...She knew how to disagree without being disagreeable, how to challenge without being offensive, she was eloquent, persuasive but never angry," Mr Salve had said.