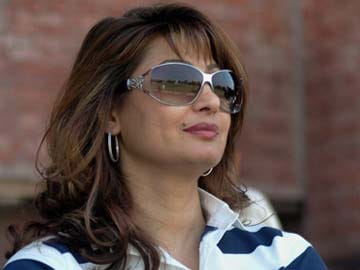 New Delhi: Sunanda Pushkar Tharoor, wife of union minister Shashi Tharoor, was found dead at the five-star The Leela Palace Hotel in Delhi on Friday evening, two days after she said she was deeply disturbed by an alleged affair her husband was having with a Pakistani journalist. (Read: Unseemly Twitter war involving Tharoors)

Mrs Tharoor was 52; she has a 21-year-old son from an earlier marriage.

Sources said a suicide note has not been found. A post-mortem will be conducted today. A tweet by her very early on Friday morning, in response to someone who wished her well, said "will try got so many issues diagnosed in KIMS that know who knows when I got 2 go with joy Hastay hua jayegay (sic)." (Condolences pour in on Twitter)

Mr Tharoor and she checked into the Leela on Thursday because their home was being painted, the minister's assistant said. Mr Tharoor returned to their suite at 8:30 pm after spending the day at the mega-conclave organised by his party, the Congress. When she didn't open the door to her bedroom, he asked the hotel staff to help him enter the room. (Sequence of events)

Mr Tharoor had tweeted at 8:01 pm on Friday that he would not attend the Jaipur Literature Festival because his wife was unwell.

On Wednesday, in a series of tweets, Mrs Tharoor accused Pakistani reporter Mehr Tarar of "stalking" the minister. (Blog: I wish Tharoors happily ever after, says Pakistani journalist)

That evening, she told NDTV's Group Editor Barkha Dutt that she planned to seek a divorce and was "heart-broken", details not reported by NDTV because it was seen as a private matter. She said she wanted to do an interview with NDTV. (Read: PM speaks to Shashi Tharoor, condoles wife's Sunanda's death)

In a phone interview on Thursday, she did not refer to a divorce but reiterated her charges against Ms Tarar. (Read: Mehr Tarar 'absolutely shocked' at Sunanda P Tharoor's death)

The Tharoors were married in 2010, the third wedding for both of them.

Promoted
Listen to the latest songs, only on JioSaavn.com
A few months before their wedding, Mr Tharoor was forced to resign from his first ministerial post after allegations that Sunanda, a Dubai-based entrepreneur, had been given free stake worth 50 crores in the new Kerala team for the cash-rich Indian Premier League.

Opposition parties alleged that the "sweat equity" was actually a payment to Mr Tharoor for behind-the-scene services for arranging the sale of the team in his home state to a consortium.