"Stories On The Move": Rajyavardhan Rathore Takes A Ride In Delhi Metro

A senior Information and Broadcasting Ministry official said Mr Rathore boarded the metro from Chhatarpur station and got down at Central Secretariat. 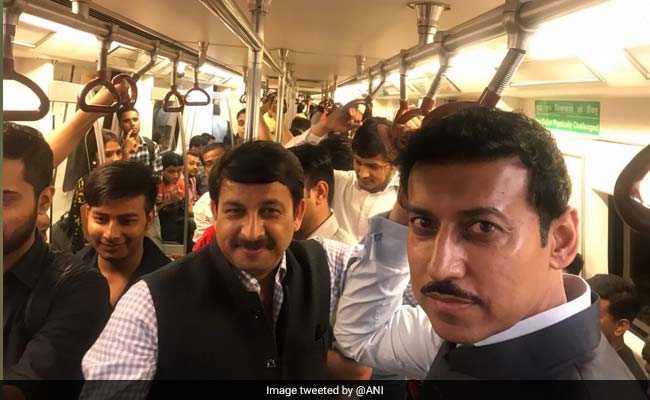 Rajyavardhan Rathore talked about meeting a hearing impaired man in the metro.

A senior Information and Broadcasting Ministry official said Mr Rathore boarded the metro from Chhatarpur station and got down at Central Secretariat.

During the metro ride, the information and broadcasting minister interacted with commuters who asked him about his fitness challenge campaign, he said.

Mr Rathore also posted a picture of the ride on his Twitter profile and was all praise for it.

"Took the metro today with @ManojTiwariMP ji , smartest way to get around the traffic in the city saving a lot of precious time. Metro trains, I think are inspirational stories on the move. Every seat, every pair of feet, is a story worth exploring!", he said.

The minister also talked about meeting a hearing impaired man who taught others like him.

"My metro story from the day, this young man who despite his hearing issues has taken up the responsibility of teaching students like him. This is the #NewIndia spirit that holds the power to change the society, the country and the world!" Mr Rathore posted on the microblogging site.

The I&B ministry official said Mr Rathore and Mr Tiwari had a meeting with Sehwag at DLF Farms in Chhatarpur in connection with the Sampark for Samarthan initiative.

The ruling BJP at the centre had launched the mega public drive of Sampark for Samarthan on the fourth anniversary of its government on May 26 under which party functionaries contact well-known names to spread the word on the works by the current dispensation.