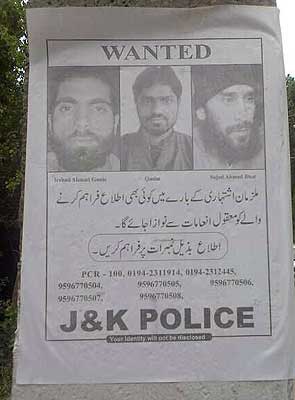 Srinagar: The police in Jammu and Kashmir claim to have identified three militants allegedly involved in the brutal attack on an Army convoy in Srinagar in which eight soldiers were killed and 13 others were injured last month.

The police have put up posters of the suspects in several parts of the city seeking information on the trio. They suspect one of them is a foreign militant while the other two are locals.

The attack took place on June 24, just a day before a visit by Prime Minister Manmohan Singh and Congress president Sonia Gandhi.

The militants opened fire on an Army vehicle near Bemina on the outskirts of Srinagar. They reportedly fired from both sides of the arterial road which leads to the Srinagar airport. They then snatched a motor bike and escaped.

Promoted
Listen to the latest songs, only on JioSaavn.com
After fleeing Bemina, the militants also opened fire at several other places in Srinagar, the capital of Jammu and Kashmir.