The chairman of Sri Lanka's Ceylon Electricity Board (CEB), quit three days after he claimed to a parliamentary panel that he was told by President Rajapaksa about PM Modi pressuring him to give the wind power project directly to the Adani Group.

The government has also not commented on the allegations or the letter. (FILE)

A Lankan official has resigned after triggering a massive controversy with his claim that an energy project in Sri Lanka was awarded to industrialist Gautam Adani's group after Prime Minister Narendra Modi pressured President Gotabaya Rajapaksa.

MMC Ferdinando, the chairman of Sri Lanka's Ceylon Electricity Board (CEB), quit three days after he claimed to a parliamentary panel that he was told by President Rajapaksa about PM Modi pressuring him to give the wind power project directly to the Adani Group.

A letter exclusively accessed by NDTV suggests, however, that the officer had written to the Lankan Finance Ministry to fast-track approvals to the 500-Megawatt renewable energy project in Sri Lanka's Mannar district and had cited "directions by the (Lankan) Prime Minister" to recognize the Adani proposal as one from the Indian government to the Lanka government.

The Adani group said it was "disappointed" by the controversy. "Our intent in investing in Sri Lanka is to address the needs of a valued neighbour. As a responsible corporate, we see this as a necessary part of the partnership that our two nations have always shared. We are clearly disappointed by the detraction that seems to have come about. The fact is that the issue has already been addressed by and within the Sri Lankan Government," said a spokesperson of the group. 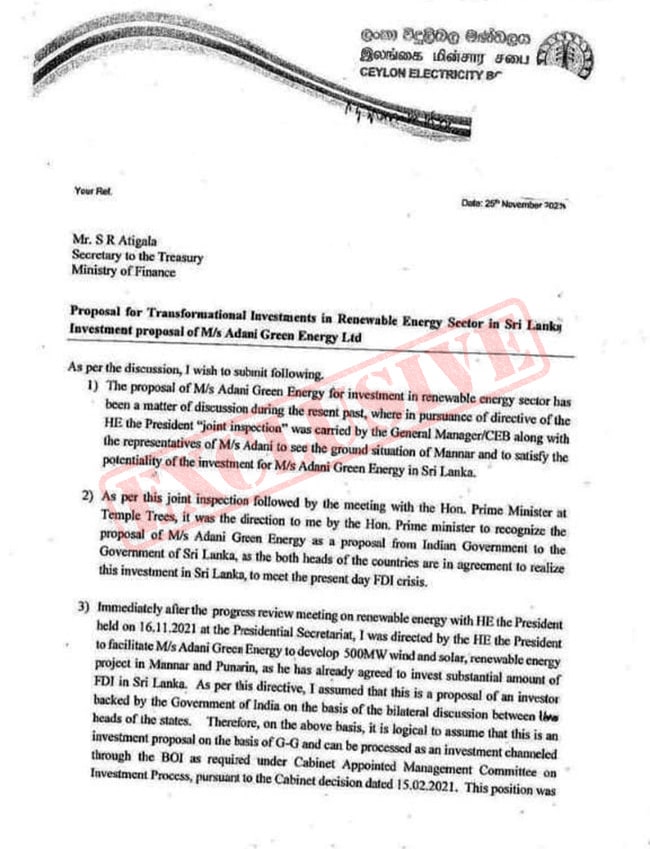 The letter, written on November 25, 2021 by Mr Ferdinando, is addressed to SR Atigala, the Secretary to the Treasury, Lanka Ministry of Finance.

The letter refers to a "direction by the Prime Minister to recognize the Adani Green Energy proposal as a proposal from Indian government to the government of Sri Lanka as both heads of the countries are in agreement to realise this investment in Sri Lanka, to meet the present day FDI crisis".

It says the official was directed, in a "subsequent meeting" with President Gotabaya Rajapaksa on November 16, to "facilitate the Adani Green Energy to develop 500 MW wind and solar, renewable energy project in Mannar and Pooneryn, as he has already agreed to invest substantial amount of FDI" in Sri Lanka.

"As per this directive, I assumed that this is a proposal of an investor backed by the government of India on the basis of the bilateral discussion between the heads of the states. Therefore, on the above basis, it is logical to assume that this is an investment proposal on the basis of G-G and can be processed as an investment channeled through the BOI (Board of Investments of Lanka)..." Mr Ferdinando says in the letter.

The official also asks that the signing of the Power Purchase Agreement and other related pacts should be moved forward as an investment proposal to Lanka.

The Adani Group reportedly won contracts worth $ 500 million to develop two wind power projects, in Mannar and in Pooneryn, in December.

The government has not responded to the allegations or the letter.

Mr Ferdinando first made the claim on Friday, at an open hearing of the Committee on Public Enterprises (COPE), a parliamentary panel.

At open hearing of parliamentary Committee of Public Enterprises-

the SriLankan president #GotabayaRajapaksha had told him,Indian PM #NarendraModi was insisting that 500 MW windpower plant be given to the ADANI Group pic.twitter.com/FNiAyTX1kU

“On November 24, the President summoned me after a meeting and said that India's Prime Minister Modi is pressuring him to hand over the project to the Adani group. I said ‘this matter doesn't concern me or the Ceylon electricity board and this consists of the board of investments'. He insisted that I look into it. I then sent a letter that the President has instructed me and that the Finance Secretary should do the needful. I pointed out that this is a government-to-government deal,” the official said in Sinhala in the video, addressing the panel.

On Sunday evening, following a strong denial by President Rajapaksa on Twitter, Mr Ferdinando had also withdrawn his comments, claiming he had been "overcome with emotion" while facing questions that suggested wrongdoing by him.

President Rajapaksa had tweeted: "Regarding a statement made by the #lka CEB Chairman at a COPE committee hearing regarding the award of a Wind Power Project in Mannar, I categorically deny authorisation to award this project to any specific person or entity."

Re a statement made by the #lka CEB Chairman at a COPE committee hearing regarding the award of a Wind Power Project in Mannar, I categorically deny authorisation to award this project to any specific person or entity. I trust responsible communication in this regard will follow.

His office followed this up with a longer statement "vehemently denying" the charge.

The controversy erupted a day after Sri Lanka changed its laws to remove competitive bidding for energy projects.

The opposition has accused the government of ramming the bill through parliament to facilitate large energy deals to the Adani group, which signed an unsolicited government-to-government agreement to build the Mannar wind power plant.

Gautam Adani had visited Sri Lanka in October and had tweeted about his meeting with President Rajapaksa.

In 2021, the Adani Group had signed a $700 million deal with the state-run Sri Lanka Ports Authority (SLPA) to develop and run the strategic Colombo Port's West International Container Terminal.