P Chidambaram had implied on Wednesday that Monday's 88 lakh vaccination figure was artificially pumped up. 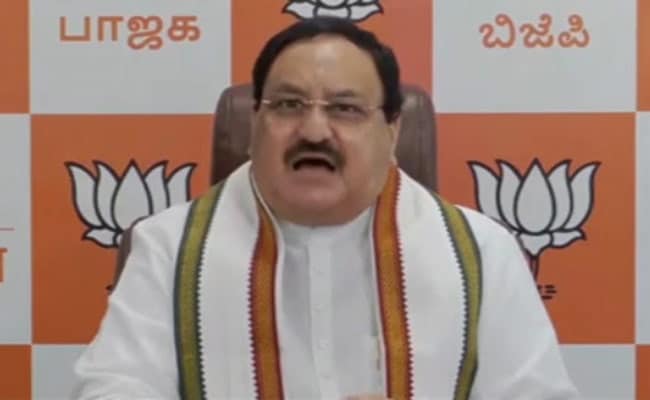 India is moving ahead on Covid vaccinations, powered by its citizens, JP Nadda said.

The BJP came back at the Congress's P Chidambaram following his searing criticism of the "record" number of vaccinations registered in India on Monday. Party chief JP Nadda on Wednesday said the country's citizens had continued to move ahead on the path of Covid inoculation "much to the dislike" of the opposition party.

"India is not limping, but sprinting ahead powered by the strength of our citizens. After the record Monday, India has crossed 50 Lakh vaccinations on Tuesday and Wednesday, much to the dislike of the Congress Party," Mr Nadda tweeted quoting the senior Congress leader's take-down from on Wednesday. He was citing Tuesday's vaccination figure for India -- 54.22 lakh.

Up to 88.09 lakh COVID-19 vaccine doses were administered across the country on Monday, the highest single-day coverage till now. The feat was achieved on day one of the Centre's new vaccination policy roll-out, opening it up for all above 18 years of age.

Mr Chidambaram had, in his tweets on Wednesday, implied that this 88 lakh figure was artificially pumped up.

Hoard on Sunday, vaccinate on Monday, and go back to limping on Tuesday.
That is the secret behind the world “record” of vaccinations on a “single day”

I am sure the “feat” will find a place in the Guinness book of records!

Mr Chidambaram's comments dovetailed with allegations that some states, including Madhya Pradesh, had hoarded vaccine doses for days to achieve Monday's record. Of the top 10 states which had administered the most number of doses, seven are ruled by the BJP.

Madhya Pradesh, for instance, set a national record on Monday by administering 16,91,967 COVID-19 vaccines. Yet, a day earlier, it inoculated only 4,098 people, according to a health bulletin issued by the state government.

To meet the Centre's target of fully inoculating all adults by the end of this year, up to 97 lakh vaccinations need to be carried out per day. The current supply situation raises questions on whether the target will be met.