Amit Shah said that President Ram Nath Kovind also laid the foundation of a big sports Enclave under the name of Sardar Patel in Ahmedabad today. 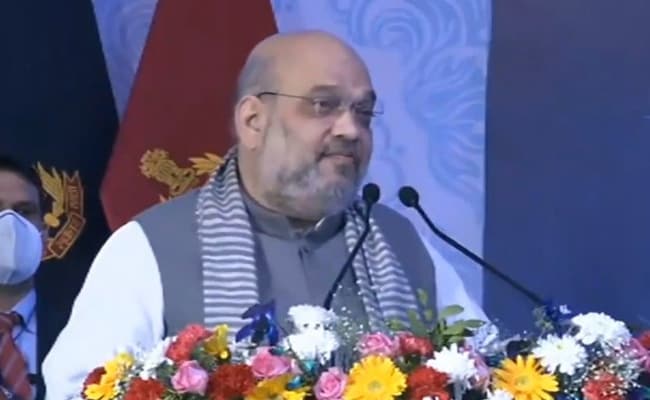 Sports is a major part of Prime Minister Narendra Modi's clarion call of Aatmanirbhar Bharat, and the government wants to assure the nation that it will provide youth with the right infrastructure and platforms, Home Minister Amit Shah said today at the inauguration event of the newly-built Narendra Modi Stadium.

Speaking at the inaugural event, Mr Shah said, "I've been working with PM Modi since 1980. He has always said the Indian youth needs to rise in sports to contribute to the nation. Thus, he started the Khelo India Movement and the Fit India Movement. Sports, too, are a major part of PM Modi's clarion call of Aatmanirbhar Bharat. We assure you that we will provide our youth the right infrastructure and platforms."

Mr Shah said that President Ram Nath Kovind also laid the foundation of a big sports Enclave under the name of Sardar Patel in Ahmedabad today.

"Today is the golden day of India's sporting sector. Today, the President of India also laid the foundation of a big sports complex under the name of Sardar Patel, the Iron man of India. This sports complex will have world-class arrangements for all major sports in the world," he said.

"Combining the Narayanpura sports complex, enclave and stadium in Ahmedabad, India will be ready to host even the Olympics in just six months! Such has been the size of infrastructure we have created. Ahmedabad will now be known as the Sports City of India," the Home Minister added.

Calling Sardar Patel Sports Enclave a very ambitious project, Shah said the facility will take Indian sports to the top globally. "There will be facilities for training and lodging for sportspersons of all major sports in the world at the enclave. As many as 3,000 people can stay and train together in this facility," he elaborated.

"It can host two different games on the same day!... Javagal Srinath, today's match referee for the third test between India and England, has fond memories of this stadium. Against South Africa, he had taken six wickets to take India to a win. On this same ground, Kapil Dev had broken Richard Hadlee's record of 431 wickets in Tests," he added.

President Ram Nath Kovind inaugurated the newly-built Motera Stadium which was renamed the Narendra Modi Stadium ahead of the pink-ball Test between India and England, in the presence of Home Minister Amit Shah and Union Minister for Youth Affairs and Sports Kiren Rijiju today.