Starting this Saturday, SpiceJet will operate two daily 30-minute flights from Ahmedabad's Sabarmati riverfront to the Statue of Unity for Rs 1,500 per ticket. 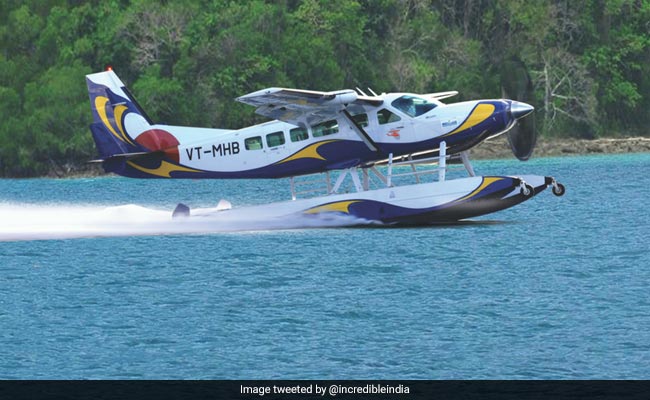 SpiceJet today said it will operate two seaplane round-trip flights every day to the Statue of Unity - on an island in Gujarat - from Ahmedabad's Sabarmati riverfront starting this Saturday.

The alternative last-mile connectivity option to the tourist destination will give people a faster, yet affordable way to reach the island of Kevadia, 200 km away from Ahmedabad.

For now, tourists have to either take a ferry ride or use a bridge to reach the Statue of Unity.

"The all-inclusive one-way fare for the 30-minute flight will start as low as Rs 1,500 under the UDAN regional connectivity scheme. Tickets will be available on www.spiceshuttle.com from October 30," the airline said today.

Flights will be operated by Spice Shuttle, a fully-owned subsidiary of SpiceJet, it added.

In a statement, SpiceJet said the move would revolutionise the country's regional connectivity as seaplanes can take-off and land on small water bodies and short airstrips.

The aircrafts overcome the infrastructural challenges that have hindered the growth of India's aviation sector in smaller towns and cities, SpiceJet Chairman and Managing Director Ajay Singh said.

"Seaplanes can connect the remotest parts of India with the mainstream aviation network without the high cost of building airports and runways," Mr Singh added.

A statement from the airline said the decision was taken after trials were successfully conducted in Nagpur, Guwahati and Mumbai. "SpiceJet has secured 18 seaplane routes under the regional connectivity scheme," it added indicating the airline plans to optimise the potential of India's domestic flight sector.

It offers concessions from the centre, state governments and airport operators to encourage flights from unserved and underserved airports, and keep the airfares affordable.