The photos of the drone show were posted by Prime Minister Narendra Modi on Twitter. 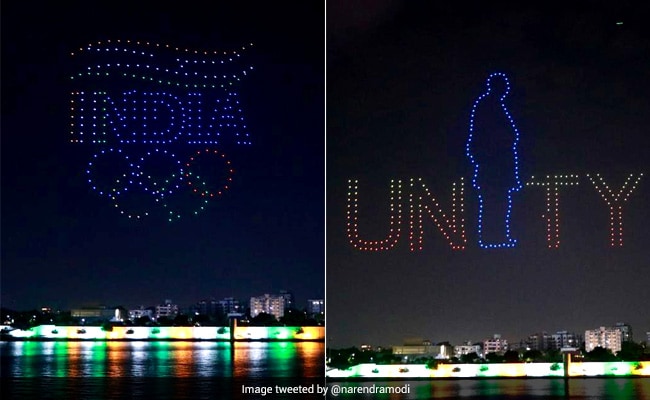 A swarm of drones lit up the night sky

Ahead of the opening ceremony of the 36th National Games in Gujarat on Thursday, over a hundred drones created a fantastic show at Ahmedabad. The drone show was designed and produced by Botlab Dynamics and it drew the national flag, portrait of Sardar Patel and logo of the games on Wednesday night. The photos of the event were posted by Prime Minister Narendra Modi on Twitter.

PM Modi posted several photos from the event. "Spectacular drone show in Ahmedabad as the city prepares for the National Games opening ceremony!" PM Modi wrote along with the pictures.

Spectacular drone show in Ahmedabad as the city prepares for the National Games opening ceremony! pic.twitter.com/OumqeCZhve

National Games are being held in the state of Gujarat for the very first time. It will be organised from 29th September to 12th October 2022. Nearly 15,000 sportspersons, coaches, and officials from across the country will be participating in 36 sports disciplines, making it the biggest National Games ever.

The sporting events will be organised in six cities of Ahmedabad, Gandhinagar, Surat, Vadodara, Rajkot and Bhavnagar.

Olympic Games Weightlifting silver medallist Mirabai Chanu will be the biggest draw at the Mahatma Mandir Complex in Gandhinagar when the 36th National Games gather steam on Friday, with competitions in nine more sports beginning a day after Prime Minister Narendra Modi declared the Games open at a spectacular ceremony.

Recently, a swarm of drones lit up the night sky over the India Gate complex showcasing the life and legacy of freedom fighter Subhas Chandra Bose and celebrating the newly-unveiled grand statue of Netaji.