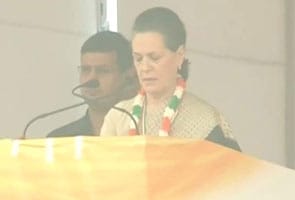 New Delhi: India and the US would work together not just for bilateral ties but for the larger good of humanity in the "times to come", Congress Chief Sonia Gandhi told President Barack Obama in her congratulatory message after he won a second term.

"Please accept my heartiest congratulations and best wishes as you commence your second innings as president," Ms Gandhi said in her letter to Mr Obama on Wednesday.

"I firmly believe that in the times to come, India and the United States, being two largest democracies of the world, will work together not only in the bilateral context but also for the larger good of the humanity," Ms Gandhi said in the letter, which was released to the media on Thursday.

Recalling her meeting with Mr Obama in November 2010, when he addressed the Indian Parliament, Ms Gandhi said it provided her an opportunity to discuss a wide range of issues with the US president.

"The results of this year's historic election are a re-affirmation of the faith American people have in your (Obama's) leadership, in the backdrop of the challenging global economic environment," she said.

"The people of India have a special admiration for you. Your inspiring address to the Indian parliament, where you invoked the philosophy of Mahatma Gandhi, resonated across the political spectrum in our country."

Ms Gandhi said Mr Obama had "steered the nation through a difficult period even as the leaders across the world were grappling to meaningfully address the fallout of the crisis".

"You also played a crucial role in bringing together leaders from across the world to shape a collective response to the crisis under the G-20 framework."
Comments
Sonia Gandhi