Solar Eclipse June 2020 Highlights: The first solar eclipse of this year, known as surya grahan in India, coincided with the summer solstice. 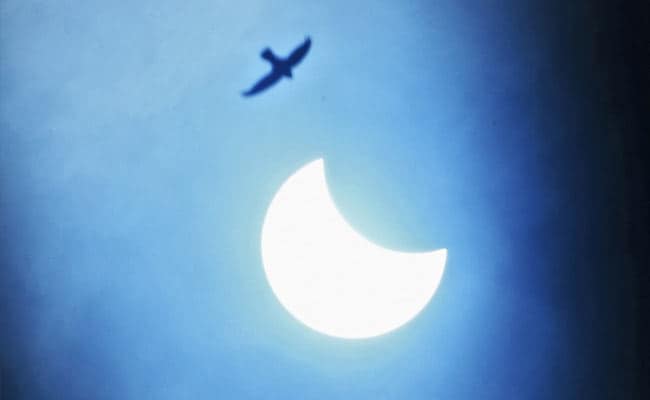 The annular solar eclipse, popularly known as the "ring of fire" eclipse, was visible in India today, with social media flooded with pictures from the rare celestial event. This was the first solar eclipse of 2020. Skywatchers living within a narrow band covering parts of Rajasthan, Haryana, and Uttarakhand were able to see the "ring of fire" with much clarity.

The first solar eclipse of this year which coincided with the summer solstice, when the Northern Hemisphere has the longest day, was an annular eclipse. Apart from India, the eclipse was visible in Congo, Sudan, Ethiopia, Yemen, Saudi Arabia, Oman, Pakistan, and China.

The eclipse started around 10:20 am and ended around 2:20 pm. It is also known as Surya Grahan in India.

The eclipsed sun should not be viewed with the naked eye, even for a very short duration of time. It may cause permanent damage to the eyes leading to blindness even when the moon covers most portion of the sun.

Here are the Highlights on the solar eclipse:

Jun 21, 2020 15:59 (IST)
Solar Eclipse 2020: Overcast conditions play spoilsport in Lucknow
Overcast conditions in Lucknow, Uttar Pradesh, proved a dampener for sky gazers keen on having a glimpse of an annular solar eclipse which coincided with the summer solstice, the longest day in the northern hemisphere.
Arrangements were made at Indira Gandhi Planetarium to view the solar eclipse while adhering to physical distancing norms in view of the COVID-19 outbreak, a senior official at the facility said.
"The annular solar eclipse started in Lucknow around 9:27 am and continued till 2:02 pm. Because of the cloud cover, it was only around 1 pm that the eclipse was visible. At the planetarium, barely 100-150 people saw it," Anil Yadav, state project co-ordinator at the planetarium said. "Those who viewed it, strictly followed the social distancing norms."
Reports of people witnessing the solar eclipse came from Sonbhadra, Ballia and other cities of UP.
Jun 21, 2020 14:23 (IST)

Karnataka: Temples in Hubli remain closed in the light of #SolarEclipse2020. pic.twitter.com/fv238yLPqP

Solar Eclipse 2020: Surya Grahan In Pictures, Video, Significance And Timings
Solar Eclipse 2020: This year it is an annular eclipse also called the 'ring of fire'. The majestic event started at 9:15 am and will reach its peak at 12:10 pm in India. The annular eclipse is visible from parts of Asia, Africa, Europe and Australia."
Jun 21, 2020 13:49 (IST)
Solar Eclipse coincides with summer solstice this year
Surya Grahan or solar eclipse this year coincides with the summer solstice, which is the longest day of the year in the Northern Hemisphere, on June 21.
The eclipse began at 10.19 am and will end at 2.02 pm. The Surya Grahan is underway in several parts of the country like Rajasthan, Uttarakhand, Gujarat, Delhi among others. The narrow annularity phase can be best seen in Dehradun, Kurukshetra, Chamoli, Joshimath, Sirs and Suratgarh.
Jun 21, 2020 13:42 (IST)
Solar eclipse: Small religious ceremony organised in Haryana's Kurukshetra
A small religious ceremony was held on the banks of the Brahma Sarovar in Kurukshetra, Harayana, as the administration had decided not to hold a fair this time on the occasion of solar eclipse amid the coronavirus pandemic.
The holy city had been placed under curfew till 4 pm to prevent people from gathering on the banks of sacred sarovars in this district for taking a dip or holding any rituals due to COVID-19 outbreak. A simple religious ceremony on the occasion of solar eclipse was held, in which only a few seers were present.
Jun 21, 2020 13:17 (IST)
Solar Eclipse seen in Israel
The moon moves in front of the sun during an annular solar eclipse as seen from the Israeli coastal city of Netanya, in Israel. The "ring of fire" was first visible in northeastern Republic of Congo from 5:56 local time (04:56 GMT) just a few minutes after sunrise. This is the point of maximum duration, with the blackout lasting 1 minute and 22 seconds. 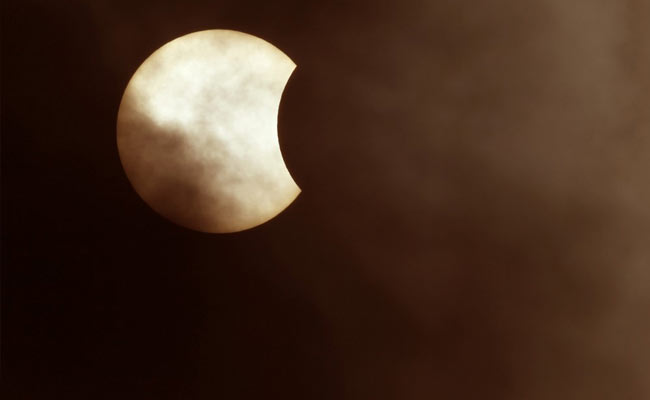 #SolarEclipse2020 as seen in Kathmandu of Nepal.

As per Nepal's BP Koirala Memorial, Planetarium Observatory and Science Museum Development Board the solar eclipse will be visible from 10:52 am to 2:32 pm today. pic.twitter.com/4peHmaoVyB

Jun 21, 2020 12:34 (IST)
Solar Eclipse seen in Bangalore
The moon partially covered the sun during an annular solar eclipse in Bangalore, Karnataka.
People in parts of Rajasthan, Haryana, and Uttarakhand saw the dramatic "ring of fire" in the sky - the first solar eclipse of 2020. People in other parts of India were only able to see a partial solar eclipse, also known as Surya Grahan. 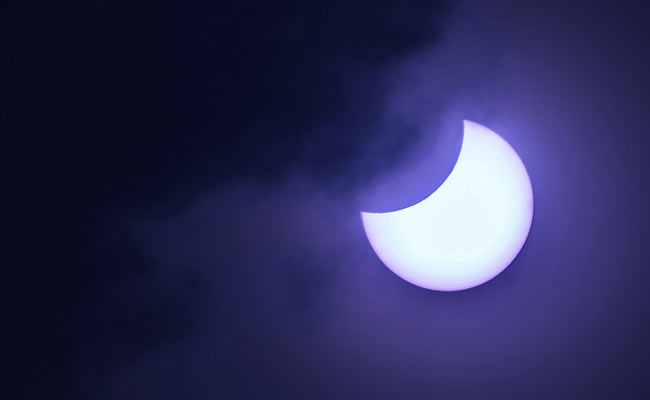 Jun 21, 2020 12:20 (IST)
How to watch the solar eclipse without damaging your eyes
Unlike the lunar eclipses that can be watched with naked eyes, solar eclipses require precautions otherwise you may harm your eyes.
Astronomers recommend using eclipse glasses, preferably ISO certified, or a camera with proper filters to watch the solar eclipse. You can also project on a screen using a pinhole camera or telescope.
Don't watch the solar eclipse directly with your naked eyes or using an x-ray film/ normal sunglass/ painted glass.
Even if you don't live near a place with best eclipse magnitude or have weather problems, you can still enjoy the surya grahan (solar eclipse) through webcasts. Among the solar eclipse live streams from India, the Aryabhatta Research Institute of Observational Sciences will stream the eclipse from Nainital. While the institute doesn't fall on the best visibility path, but it is close enough to offer a good view.
Indian Institute of Astrophysics is also hosting a live stream of today's solar eclipse.
Jun 21, 2020 12:13 (IST)
Solar Eclipse 2020 seen in the skies of Dehradun
So-called annular eclipses occur when the Moon -- passing between Earth and the Sun -- is not quite close enough to our planet to completely obscure sunlight, leaving a thin ring of the solar disc visible.
They happen every year or two, and can only been seen from a narrow pathway across the planet.
Were the Moon just a wee bit closer -- 379,100 rather than 381,500 kilometres away -- Earthlings would be treated to a total blackout, visible at a given spot on our planet about every 400 years.
The solar eclipse is now visible from Dehradun, Uttarakhand. 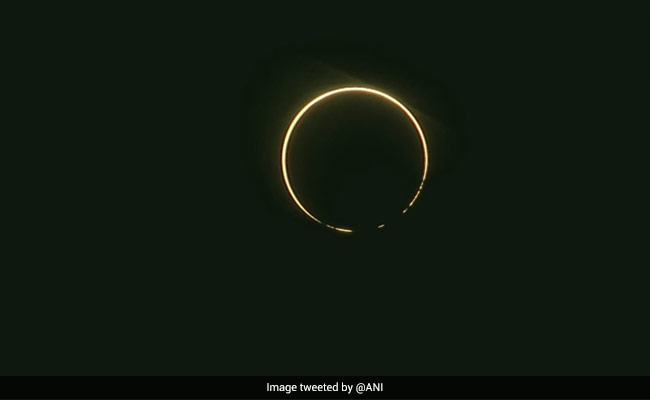 Jun 21, 2020 12:01 (IST)
Solar eclipse 2020: Cloudy skies may play spoilsport in Delhi
Cloudy skies are likely to play a spoilsport for sky gazers in the national capital. The annular phase was visible on Sunday morning from some places within a narrow corridor of northern part of the country (parts of Rajasthan, Haryana and Uttarakhand). Few prominent places within this narrow annularity path are Dehradun, Kurukshetra, Chamoli, Joshimath, Sirsa, Suratgarh. It will be seen as a partial solar eclipse from the rest part of the country.
The annular path also passes through Congo, Sudan, Ethiopia, Yemen, Saudi Arabia, Oman, Pakistan, and China.
N Rathnashree, Director of Nehru Planetarium, said visibility of the eclipse is being hampered due to clouds.
Jun 21, 2020 11:57 (IST)
Solar Eclipse visible from Punjab

Punjab: #SolarEclipse2020 as seen in the skies of Amritsar today. pic.twitter.com/usRHFtjlgP

Jun 21, 2020 11:49 (IST)
Weather conditions critical for viewing solar eclipse
"Good weather is the key to successful eclipse viewing," astrophysicist Fred Espenak, an expert on eclipse prediction, commented on the NASA Eclipse website. "Better to see a shorter eclipse from clear sky than a longer eclipse under clouds."
A solar eclipse always occurs about two weeks before or after a lunar eclipse, when the Moon moves into Earth's shadow. Lunar eclipses are visible from about half of Earth's surface.
Even if the day has darkened, looking at a solar eclipse with the naked eye is dangerous. Sunglasses -- which don't filter out UV rays -- do not offer any protection, Florent Delefie, an astronomer and the Paris Observatory, said.
Jun 21, 2020 11:41 (IST)

Uttarakhand: #SolarEclipse2020 as seen in the skies of Dehradun.

The solar eclipse will be visible until 1:50 PM with maximum visibility of the eclipse at 12:05 PM. It will be visible from Asia, Africa, the Pacific, the Indian Ocean, parts of Europe and Australia. pic.twitter.com/iugvgwFEYR

WATCH | The first solar eclipse of 2020 is visible from most parts of India. NDTV reports from Delhi's Nehru Planetarium. #SolarEclipse2020pic.twitter.com/RzOs5HoGH3

United Arab Emirates: #SolarEclipse2020 as seen in the skies of Dubai.

The solar eclipse will be visible until 11:12 AM. It will also be visible from Asia, Africa, the Pacific, the Indian Ocean, parts of Europe and Australia. pic.twitter.com/EAGWuVIdBO

Jun 21, 2020 11:06 (IST)
"Maximum Eclipse" to be witnessed around 12:10 PM
Arcing eastward across Africa and Asia, it will reach "maximum eclipse" -- with a perfect solar halo around the Moon -- over Uttarakhand at 12:10 PM.
More spectacular, but less long-lived: the exact alignment of the Earth, Moon and Sun will be visible for only 38 seconds.
"The annular eclipse is visible from about two percent of Earth surface," Florent Delefie, an astronomer and the Paris Observatory, told news agency AFP. "It's a bit like switching from a 500-watt to a 30-watt light bulb," he added. "It's a cold light, and you don't see as well."
Jun 21, 2020 11:02 (IST)

Gujarat: #SolarEclipse2020 seen in the skies of Gandhinagar.

The solar eclipse will be visible until 1:32 PM with maximum visibility of the eclipse at 11:42 IST. It will be visible from Asia, Africa, the Pacific, the Indian Ocean, parts of Europe and Australia. pic.twitter.com/Lp0xs53JoF

Madhya Pradesh: Portals of temples in Bhopal remain closed in the light of #SolarEclipse2020 today.

The solar eclipse will start at 9:15 AM today and will be visible until 3:04 PM. pic.twitter.com/Rtch2qi2mM 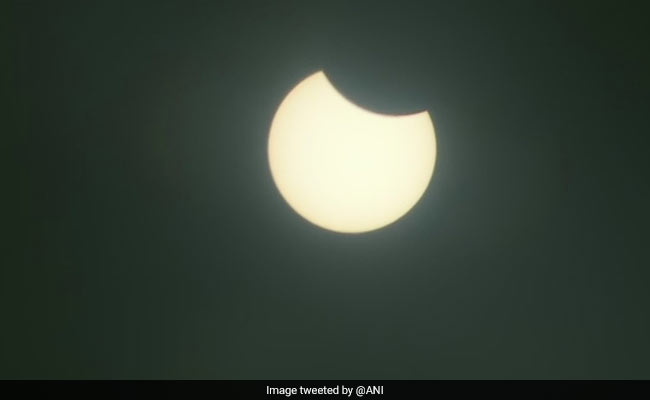 It will start at 9:15 AM and will be visible until 3:04 PM. The maximum eclipse will take place at 12:10 IST. It will be visible from Asia, Africa, the Pacific, the Indian Ocean, parts of Europe and Australia. pic.twitter.com/hewOopYiCY

Delhi: #SolarEclipse2020 as seen in the skies of the national capital today.

Jun 21, 2020 10:36 (IST)
Solar Eclipse visible in India
A solar eclipse occurs on a new moon day when the moon comes in between earth and the sun, and the moon casts a shadow over earth.
The eclipsed sun should not be viewed with the naked eye, even for a very short duration of time. It may cause permanent damage to the eyes leading to blindness even when the moon covers most portion of the sun.