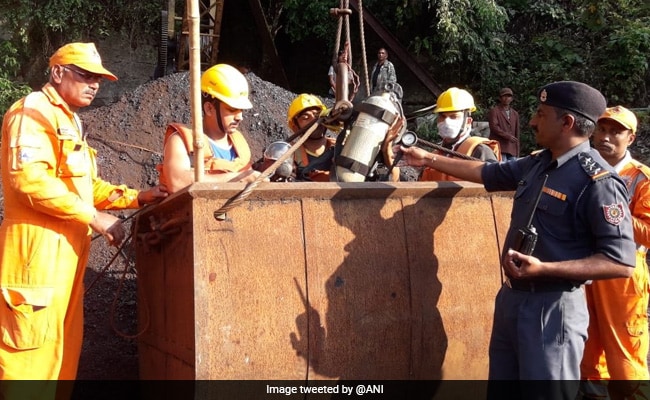 Sources in Coal India say their experts, technicians and high-power pumps have been mobilised.

Nearly two weeks have passed since a freak accident trapped 15 miners in a rat-hole mine in Meghalaya's East Jaintia Hills, and the authorities have all but given up hope of rescuing anybody alive. The search and rescue operations were suspended on Tuesday and two weeks after the accident there are no signs that any of the 15 miners are still alive.

Meghalaya Chief Minister Conrad Sangma admitted on Wednesday that they had to halt operations to pump out water from the mine due to the non-availability of high-power pumps. He, however, added that the state is in the process of acquiring these high-power pumps for the rescue operations. "The situation right now is very difficult. Almost the entire river came into the mine. 12 lakh litres of water have been pumped out but the water level is rising," Mr Sangma told NDTV.

A team of state-run Coal India Ltd, the world's largest coal miner, is also reaching the northeast state today after getting a request from the Meghalaya government, people with direct knowledge of the matter said.

Dec 27, 2018 15:33 (IST)
The Indian Air Force has been roped in for the Meghalaya rescue operations
Dec 27, 2018 15:31 (IST)
Coal India Limited (CIL) said it is preparing to launch a rescue operation at the coal mine in Meghalaya's East Jaintia Hills to rescue the 15 trapped miners.
General Manager of CIL's Northeastern Coalfields, J. Borah said the operation to rescue the miners will be launched soon after all the equipment and manpower arrives at the site. "We have received a request from the Meghalaya government to help carry out search and rescue operations in the coal mine where some miners were trapped. Immediately we have mobilised the manpower within the organisation so as to reach the site as soon as possible," Mr Borah said.
Dec 27, 2018 13:58 (IST)
The NDRF divers are waiting for the water level in the mine to fall from 70 feet to 40 feet, the level at which their divers can operate.
Dec 27, 2018 12:46 (IST)
Last week the state government had approached Indian army for pumps but the army did not have any resources to pump out water from 70 feet depth, the army sources said.
Dec 27, 2018 12:07 (IST)
NDRF officials at the site said they are not certain whether the foul smell is of decomposed bodies as it could be from stagnant water, which has not been pumped out for three days.
Dec 27, 2018 11:52 (IST)
Foul Smell Detected In The Cave
The Meghalaya government has said it is speeding up rescue efforts after divers at the site reported they detected foul smell in the cave, raising concerns it could be from decomposed bodies.
"We are deeply concerned about the trapped miners in Meghalaya and are ready to help in whichever way possible. We are in touch with the officials of the Govt. of Meghalaya to offer our assistance in this regard. We hope all miners are rescued safely," pump-maker Kirloskar Brothers Ltd said in a statement.
Dec 27, 2018 11:02 (IST)
Bigger Pumps Awaited
An Indian heavy equipment firm that sent powerful pumps to Thailand to save 12 boys trapped in a cave in July has offered help in the search for 15 people trapped in a rat-hole mine in Meghalaya for two weeks.
The firm, Kirloskar Brothers, had lent high-powered pumps as well as manpower to rescue 12 boys and their football coach from a flooded cave in Thailand a few months ago.
Dec 27, 2018 10:48 (IST)
While two low-capacity pumps were used initially, eight more were brought in the following days. All of them were ineffectual in pumping out water. Experts say at least 10 pumps of 100 horsepower each will be required for the task.
"It's not the time to play politics. There is no question of calling off the operation. The operation is going to go to a different level now. The Home Ministry is in touch and helping us. We will continue trying and give more efforts," Zenith Sangma, former Congress minister and party spokesperson
Dec 27, 2018 10:14 (IST)
The mine is filled with 70 feet of water, making it inaccessible to rescue workers. "For the past two weeks, water has not receded much. Our divers can operate up to 40 feet, so we need to pump out the water and need support from the state government," said Mr Sastri, who called the rescue operation the most challenging the NDRF has seen.
Dec 27, 2018 10:13 (IST)
On Tuesday, the district administration and the NDRF were waiting for powerful 100 horsepower pumps. The state government is yet to send them, people with direct knowledge of the matter said.
"We have not found anyone, dead or alive, so we are waiting for support from the state government to carry on the rescue operation," SK Sastri, Commandant of the NDRF's 1st battalion, told NDTV.
Meghalaya trapped minersMeghalaya minersMeghalaya Miners Trapped