"They call me 'Katappa'. I want to tell you that even 'Katappa' had self-respect and did not have double standards like you," Eknath Shinde said 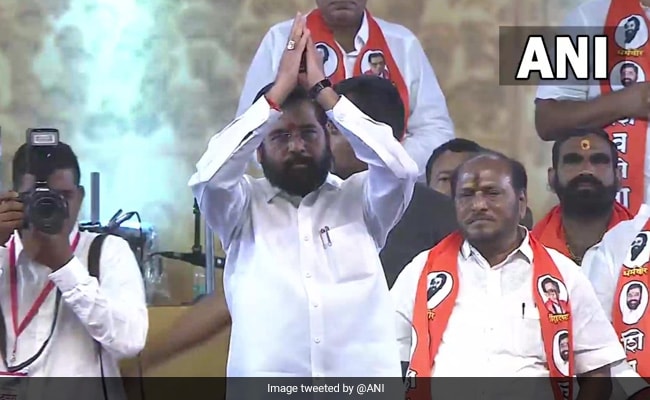 Chief Minister Eknath Shinde during his Dussehra rally today hit back at Uddhav Thackeray for his Katappa remark, saying that even Katappa had self-respect and did not have double standards.

"They call me 'Katappa'. I want to tell you that even 'Katappa' had self-respect and did not have double standards like you," Shinde said.

Recently Uddhav Thackeray said, "The only thing I feel angry about is that when I was admitted to the hospital, the people whom I gave the responsibility (of the state) became 'Katappa' and betrayed us... They were thinking that I will never return from hospital."

Slamming Uddhav Thackeray, Shinde said that if Balasaheb Thackeray had been alive, Narayan Rane would have become the CM.

"He (Uddhav Thackeray) didn't feel ashamed of taking the Oath of CM. If Balasaheb Thackeray had been alive he would not have become CM, Balasaheb would have made Narayan Rane CM", CM added.

Balasaheb Thackeray's son Jaidev Thackeray came to show his support and shared the stage with Maharashtra CM Eknath Shinde during the Dussehra rally at Mumbai's BKC ground on Wednesday.

Shinde paid tribute to Balasaheb Thackeray. 'Shashtr pooja' (worship of arms) was performed for the 51 feet sword for which a Mahant was called from Ayodhya in UP.

Shinde lambasted his former party leader Uddhav Thackeray over the alliance with Congress and called him a traitor. "Balasaheb Thackeray made an alliance with BJP. You did gaddari, we are not gaddar. You have committed a sin... go apologise to Balasaheb samadhi at Shivaji park".

Shinde further lauded his governance and said that while Uddhav Thackeray betrayed the people of Maharashtra and sold the ideology of Balasaheb Thackeray, he brought about a revolution. "You point at us for stealing your father but you have sold your father and the packed ground here shows this," he said.

Shiv Sena's Shinde faction leader Ramdas Kadam called out Uddhav Thackeray saying, "Even your brother, cousins or Raj Thackeray are not with you Uddhav ji, if you cannot even keep your family intact, how will you keep the state intact?"

In his attack, Shinde said, "This is not your (Uddhav Thackeray) pvt ltd company. The Shiv Sena is of Shiv-Sainiks who have given their sweat for it. Not for people like you, who did partnerships and sold it."

Mentioning Uddhav Thackeray's tenure he said that for two years they followed all the orders while Uddhav Thackeray destroyed the ideology of Balasaheb. "As mentioned by Gulabrao Patil all the MLAs used to meet me and tell about their problems because you never met them... I used to give aid to them (MLAs) from my ministry. Why MLAs and MPs left you? Raj Thackeray, Narayan Rane, and Smita Thackeray left you. Are we all wrong?" he asked.