Shatrughan Sinha said though in the interview PM Narendra Modi looked "cool and composed" but it was not "convincing or at par with his earlier performances". 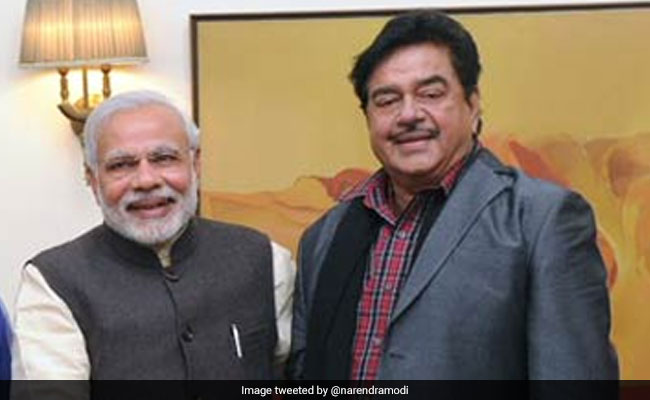 Actor-turned-politician Shatrughan Sinha, the ruling BJP's in-house critic, on Thursday offered his review of Prime Minister Narendra Modi's New Year interview to news agency ANI and it was not exactly glowing. Calling it a "well-scripted, choreographed, well-researched and rehearsed" interview, the Bihar MP urged PM Modi to hold a press conference as his predecessors have done in the past and take "candid extempore" questions.

"Sir, we all saw your well-scripted, choreographed, well researched and rehearsed TV interview on Monday evening. With due respect to the anchor, wonder lady, Smita Prakash, isn't it high time and the right time to enhance your image as an able and capable leader taking candid extempore questions," Mr Sinha, nicknamed "shotgun" for his outspokenness, said in a series of tweets.

"We know you don't want to face them but at least have the courage to answer questions from the tall statesman Yashwant Sinha and learned journalist Arun Shourie," he said, referring to two former BJP colleagues turned sharp PM Modi critics.

Mr Sinha said though in the interview the PM looked "cool and composed" but it was not "convincing or at par with his earlier performances".

Echoing opposition criticism over the prime minister not calling a single press conference in the last four and half years, Mr Sinha said, "In the past all Prime Ministers have had Press conferences but Sir, you haven't had even one in your tenure of 4.5 years. Why Sir? Let's have genuine journalists without the 'Sarkari' (government) mindset and not your regular 'Raag Darbari' (King's court) clan."

The veteran actor wrapped up his critique urging, "as a friend, colleague and brother" to accept "this food for thought" as it is "good for you and the nation, but if you reject it then may God Bless us. Elections are around the corner, Sir. Long Live Democracy."

Smita Prakash, the editor who interviewed PM Modi, responded to Mr Sinha saying he was a hero "shotgun" and not a villain like Saamba.

"Sir if the tweet is for Modi, be the hero that you used to be and tag him no? Why are you tagging small journalists like us like a coward? You are shotgun and not a Saamba," she remarked.