At the fifth Indian Ocean Conference, Dr Jaishankar said in a globalised world it is vital that freedom of navigation is respected 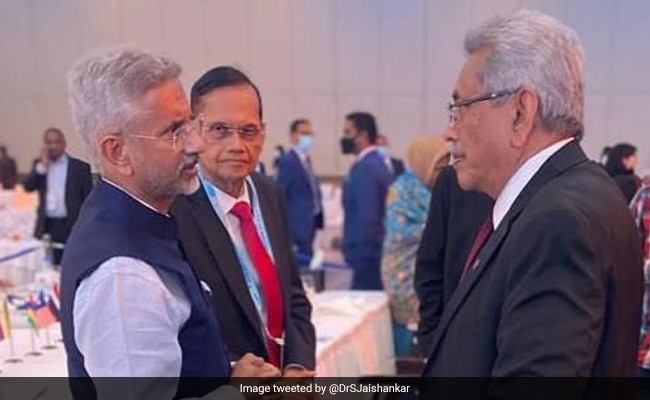 The consequences of China's rise and its growing capabilities are "particularly profound", External Affairs Minister S Jaishankar has said as he flagged the "sharpening of tensions" on territorial issues across Asia with Beijing's actions raising a question mark on the agreements of yesteryears.

Speaking at the fifth Indian Ocean Conference - IOC 2021 - in Abu Dhabi on Saturday, Jaishankar also said that in a globalised world, it is vital that the freedom of navigation and overflight and unimpeded commerce are respected and facilitated.

"Since 2008, we have witnessed a greater caution in US power projection and an effort to correct its over-extension. It may have taken different forms and be articulated in very different ways. But there is a larger consistency over three Administrations that they themselves may not readily recognise," he said.

Good to meet President @GotabayaR at the 5th Indian Ocean Conference. His address was a prominent feature of the inaugural session. pic.twitter.com/V2hQWQiK0D

"It is expressed in footprint and posture, terms of engagement, extent of involvement and nature of initiatives. Overall, the United States is moving towards greater realism both about itself and the world. It is adjusting to multipolarity and rebalancing and re-examining the balance between its domestic revival and commitments abroad," he said.

"The second major trend is the rise of China. Even otherwise, the emergence of a power at a global level is an extraordinary happening. That this is a 'different'' kind of polity enhances the sense of change. The USSR may have borne some similarities, but it never had the centrality to the global economy that China has today," he said.

"The consequences of China's growing capabilities are particularly profound because of the extrapolation of its domestic seamlessness to the world outside. As a result, whether it is connectivity, technology or trade, there is now an ongoing debate on the changed nature of power and influence.

"Separately, we have also seen a sharpening of tensions on territorial issues across the breadth of Asia. Agreements and understandings of yesteryears now seem to have some question marks. Time will, of course, provide answers," he said, apparently referring to the unresolved border standoff between India and China in eastern Ladakh since May last year.

India has told China that it should adhere to the previously signed bilateral agreements on maintaining peace and tranquillity along the Line of Actual Control (LAC).

The Chinese military's aggressive moves in eastern Ladakh along the LAC with India last year triggered a border standoff between the two sides.

The standoff between the Indian and Chinese militaries erupted on May 5 last year following a violent clash in the Pangong lake areas and both sides gradually enhanced their deployment by rushing in tens of thousands of soldiers as well as heavy weaponry.

India, the US and several other world powers have been talking about the need to ensure a free, open and thriving Indo-Pacific in the backdrop of China''s rising military maneuvering in the region.

Asserting that difficult times require stronger international cooperation, he said the Quad - the Quadrilateral Security Dialogue comprising the United States, India, Japan and Australia - is a good example at one extremity of the Indian Ocean.

"Within the space of a year, it has developed a robust agenda covering maritime security, cyber security, climate action, vaccine collaboration, critical and emerging technologies, higher education, resilient supply chains, disinformation, multilateral organisations, semi-conductors, counter-terrorism, humanitarian assistance and disaster relief as well as infrastructure development. The old adage that where there is a will there is a way clearly has much to it," he said.

"Another promising endeavour is the Indo-Pacific Oceans Initiative that is being undertaken in the framework of the East Asia Summit at the initiative of India. It is a good illustration of the practical challenges that we, the nations of the Indian Ocean, face in terms of nurturing, securing and utilizing the maritime domain," he said.

He said that any serious discussion of a domain naturally involves an assessment of the rules that apply. In the case of the maritime one, the United Nations Convention on the Law of the Sea (UNCLOS) 1982 is regarded very much as the constitution for the seas.

"Especially in a globalised world, it is vital that freedom of navigation and overflight and unimpeded commerce are respected and facilitated. It is also essential that disputes, if any, are resolved through peaceful means without threat or use of force and the exercise of self-restraint in the conduct of activities.

"As a state party to UNCLOS itself, India has always urged all parties to show utmost respect for the convention, including recognising the authority of its tribunal and its awards. Only then can we be assured that the sea lanes of communication remain conducive to peace, stability, prosperity and development," he added.

In 2016, an international tribunal ruled against China's claims to rights in the disputed South China Sea. Beijing dismissed the ruling that favoured the Philippines and said it would not be bound by it.

In August, the Presidential Statement on maritime security, adopted unanimously under India's Presidency after the UN Security Council open debate reaffirmed in categorical terms that the 1982 UNCLOS sets out the legal framework for maritime activities, sending a strong message to China.

Mr Jaishankar also said that the American withdrawal from Afghanistan and the impact of COVID pandemic have significantly heightened uncertainties in the Indian Ocean region that is particularly vulnerable to health and economic stresses.

On the existential issue of climate change, he said countries of the Indian Ocean have the highest stakes. "There is widespread disappointment about the lack of adequate progress on climate finance. Developing countries cannot consent to the developed shifting responsibilities," he said.

The theme of the fifth Indian Ocean Conference - IOC 2021 - is "Indian Ocean: Ecology, Economy, Epidemic". The first edition of the conference was hosted in Singapore in 2016 followed by three successive editions in Sri Lanka, Vietnam and Maldives respectively.