Election In Maharashtra: The NCP had earlier inducted former BJP MLA Manikrao Kokate into its ranks and given him the party ticket from Sinnar in Nashik district. 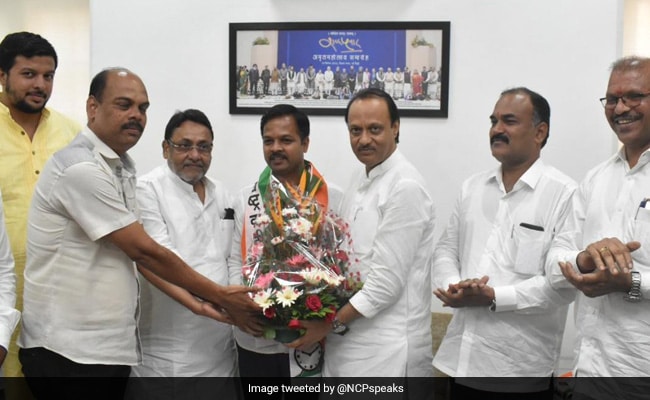 Maharashtra Election: Sharad Pawar's party has lost many leaders to BJP, Shiv Sena ahead of elections

At a time when the Nationalist Congress Party (NCP) is helplessly watching its leaders stream into the ruling coalition ahead of the Maharashtra assembly elections, the opposition party today hit back by inducting a Shiv Sena MLA into its ranks.

Amit Ghoda joined the NCP in the presence of senior leaders Ajit Pawar and Nawab Malik at the party headquarters in Mumbai. He had won the bypoll from Palghar in February 2016, following the death of his father Krishna Ghoda.

Krishna Ghoda was the sitting MLA from the same constituency when he died on May 24, 2015.

Amit Ghoda's entry into the NCP, however, was by no means the first defection from the ruling coalition to the opposition party led by Sharad Pawar. On Wednesday, former BJP MLA Manikrao Kokate had joined its ranks to get the party ticket from Sinnar in Nashik district.

Former BJP legislator Vijay Ghodmare switched allegiance to the NCP on September 14 to become its candidate from Hingana constituency in Nagpur. Later that month, Congress MLA Bharat Bhalke joined the NCP and was subsequently asked to contest from Solapur's Pandhapur.

Meanwhile, the list of Congress and NCP deserters is getting longer with each passing week. Former Maharashtra Ministers Ganesh Naik and Sachin Ahir; Satara MP Udayanraje Bhosale; and MLAs Shivendrasinh Bhosale, Vaibhav Pichad and Sandip Naik were among those who quit the NCP recently to join the BJP or the Shiv Sena. Party leader Namita Mundada also crossed over to the BJP even though Sharad Pawar had projected her as his pick for Kaij constituency in Beed.

The Congress, on the other hand, lost Kashmiram Pawara and Gopaldas Agrawal - the Congress MLAs from Shirpur and Gondia respectively - to the BJP on Monday.

Maharashtra will go to the polls on October 21, and the votes will be counted three days later.