Why Is March 23 Observed As Shaheed Diwas? 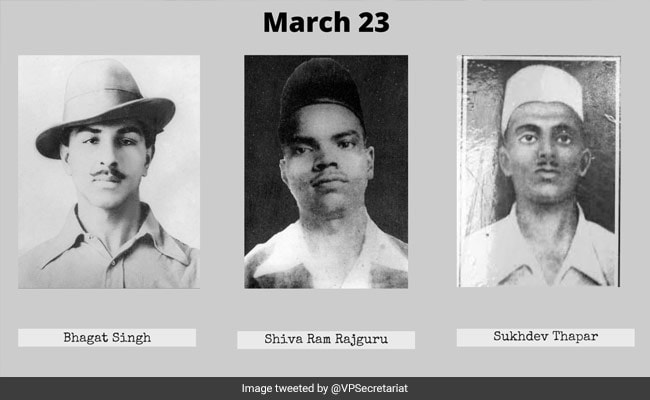 Shaheed Diwas: Bhagat Singh, Shivaram Rajguru and Sukhdev Thapar were hanged to death on this day.

Shaheed Diwas, also known as Martyrs' Day, honours the valour and commitment of those who sacrificed their lives for the country. On this day, freedom fighters Bhagat Singh, Shivaram Rajguru and Sukhdev Thapar were hanged to death by the British rulers of India in 1931.

Shaheed Diwas is observed on a number of occasions in India. Besides March 23, the day Mahatma Gandhi was assassinated, January 30, is also marked as Shaheed Diwas.

Today, people from all walks of life pay their respects to the heroes and take inspiration from their struggle to uphold and protect the country's honour.

Prime Minister Narendra Modi paid his tribute to the freedom fighters on Shaheed Diwas. "Salutations to the revolutionaries of independence, ''Amar Shaheed Veer'' Bhagat Singh, Sukhdev and Rajguru on Martyrdom Day," he wrote in Hindi.

PM Modi added, "The sacrifice of these great sons of ''Maa Bharati'' will remain an inspiration for every generation of the country. Jai Hind."

Bhagat Singh, Sukhdev and Rajguru joined the freedom struggle and wanted to avenge the death of Lala Lajpat Rai. The three young revolutionaries were arrested on various charges, including the murder of British police officer John Saunders in 1928. But they didn't want to kill John Saunders. Their target was Superintendent of Police James Scott, who had ordered his men to lathi-charge protesters leading to the death of Lala Lajpat Rai.