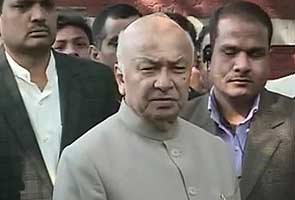 New Delhi: The row over Sushil Kumar Shinde's "saffron terror" remark might end shortly, sources said, adding that the Home Minister is expected to make a clarification as the UPA government, desperate to transact important legislative business, makes every effort to ensure that Parliament functions when the Budget Session convenes tomorrow.

A belligerent BJP has made it clear that its attack on Mr Shinde will dominate proceedings as the session opens. But, sources said, the main Opposition party has agreed to withdraw its protest of Mr Shinde withdraws his comments.

The Home Minister had said in Jaipur last month, "We have got an investigation report that be it the RSS or BJP, their training camps are promoting Hindu terrorism." He later said he meant "saffron terrorism" not "Hindu terrorism."

The BJP was livid and said that the minister must either apologise or be sacked.  This morning, party chief Rajnath Singh led top leaders and workers in a protest march from Jantar Mantar towards Mr Shinde's residence. They were briefly detained by the police before they could reach Parliament Street. Mr Singh said the protest would continue inside Parliament and his party indicated that it could even boycott Mr Shinde, which would mean not allowing him to speak at all in either House by disrupting proceedings every time he rises.

Later, after an all-party meeting called by the Speaker on the eve of the session, Leader of Opposition in the Lok Sabha and senior BJP leader Sushma Swaraj said she had raised the issue and asked Speaker Meira Kumar to intervene. "Mr Shinde said the BJP and RSS runs terror camps... in that case, I have no right to be the Leader of Parliament, we want the Speaker to address this issue," she said.

Promoted
Listen to the latest songs, only on JioSaavn.com
At the meeting, the PM said he hoped to find a "find a constructive solution to all issues... All political parties have an obligation to ensure smooth passage of the session," he said. Parliamentary Affairs Minister Kamal Nath said the government would discuss the Shinde controversy with the BJP.

The BJP's Shinde strategy is not just a key element of its plans in Parliament. It is also part of a larger attempt by the party to regroup its traditional Hindu vote bank. The BJP's ideological mentor, the RSS, has mandated a Hindutva relaunch as part of its action plan for general elections 2014.