A career diplomat, Dr Jaishankar, a 1977-batch Indian Foreign Service officer, had previously served as Foreign Secretary and was said to be a surprise addition to Prime Minister Narendra Modi's cabinet. 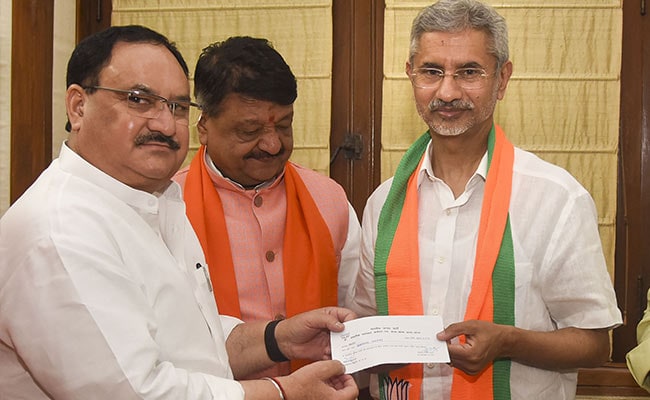 Foreign Minister S Jaishankar today formally joined the BJP in the presence of the party working president JP Nadda at Parliament House. A career diplomat, Dr Jaishankar, a 1977-batch Indian Foreign Service officer, had previously served as Foreign Secretary and was said to be a surprise addition to Prime Minister Narendra Modi's cabinet after the BJP won the national elections again last month.

The BJP is likely to field Dr Jaishankar from Gujarat as its Rajya Sabha candidate. He has to be a Member of Parliament within six months of being sworn in.

Dr Jaishankar is regarded as a close aide of the Prime Minister and was also known as his "crisis manager" on foreign affairs, according to news agency ANI. He served as Foreign Secretary for three years till 2015 during PM Modi's first term as Prime Minister, until his retirement in 2018.

He was appointed Foreign Secretary in January 2015, replacing Sujata Singh, whose term was abruptly curtailed by the government. After retiring from government service, he was hired by the Tata Group as President of its global corporate affairs.

In March this year, he had received the Padma Shri award from President Ram Nath Kovind.

Dr Jaishankar was also a key member of the team that worked on the nuclear deal with the US. The deal, which had taken several years to develop, was signed by the UPA government headed by Manmohan Singh in 2007. Dr Jaishankar was also Dr Singh's first choice in 2013 to replace Ranjan Mathai as Foreign Secretary.

After taking charge as foreign minister, Dr Jaishankar became one of the two new faces in the powerful Cabinet Committee on Security or CCS. The other important figure in the committee is PM Modi's closest confidant and new Home Minister Amit Shah.

Dr Jaishankar, who was also a former envoy to China, has vast experience in dealing with the country. Experts have said his experience will be valuable in improving relations with Beijing, badly hit after the Doklam stand-off in 2017.

Dr Jaishankar took over as Foreign Minister from Sushma Swaraj.