"Beyond What You Can Imagine": S Jaishankar Flags Off Mansarovar Yatra 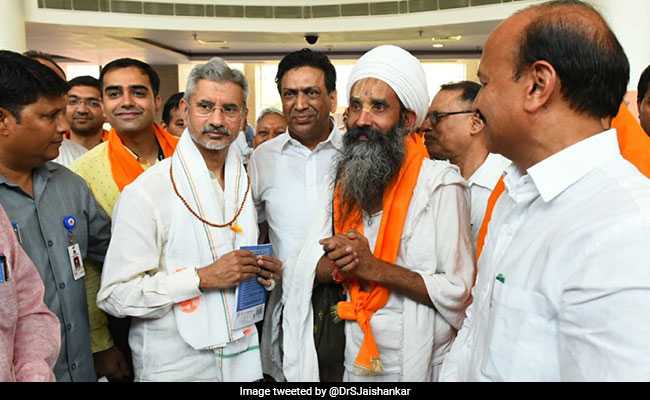 S Jaishankar flagged off the first batch of pilgrims in Delhi.

Foreign Minister S Jaishankar today flagged off the first batch of Kailash Mansarovar Yatra of 58 pilgrims in Delhi. The pilgrimage is "beyond what you can imagine," he said as he wished the pilgrims a "safe and spiritually-fulfilling journey".

He flagged off the yatra at the Jawaharlal Nehru Bhawan in Delhi and said the pilgrimage is an "important step" in promoting "people-to-people exchanges, and strengthening friendship and understanding between India and China".

"I would also like to recognise the support extended by the government of the People's Republic Of China in organising of the yatra, which is an important step towards promoting people-to-people exchanges and strengthening friendship and understanding between the two countries," he was quoted as saying by news agency PTI.

Dr Jaishankar , a career diplomat with extensive experience in bilateral relations with China, US and Pakistan, took charge of the foreign ministry last month. He was India's ambassador to China between 2009 and 2013.

Dr S Jaishankar shared the pictures of the event on Twitter. "Flagged off the first batch of 58 Yatris, as they set off to Kailash Manasarovar. Wishing the pilgrims a safe and spiritually-fulfilling journey! It is beyond what you can imagine!" he wrote in a tweet.

In another post, he recalled his visit to Kailash Mansarovar in 2012 and said it was "once in a lifetime experience" .

Recall the memories of my 2012 visit to Kailash Manasarovar. Once in a lifetime experience! pic.twitter.com/FZPSBTUUxD

While flagging off the Kailash Yatra, he urged the pilgrims to adhere to safety norms during the journey.

The Ministry of External Affairs organises the annual pilgrim via two different routes - Lipulekh Pass (Uttarakhand) and Nathu La Pass (Sikkim). For the Lipulekh route (Uttarakhand), there will be 18 batches with 60 pilgrims each this year, and for the Nathu La (Sikkim) route, 10 batches with 50 yatris each. Today, Dr S Jaishankar flagged off the yatra for Lipulekh route.