"Among Closest Relationships": India On 1st Key Meet With US, Israel, UAE

S Jaishankar, who is currently on a 5-day visit to Israel, was accompanied by the home nation's Foreign Minister Yair Lapid, during the virtual meeting on Monday. US Secretary of State Antony Blinken and UAE Foreign Minister Sheikh Abdullah bin Zayed Al Nahyan participated virtually. 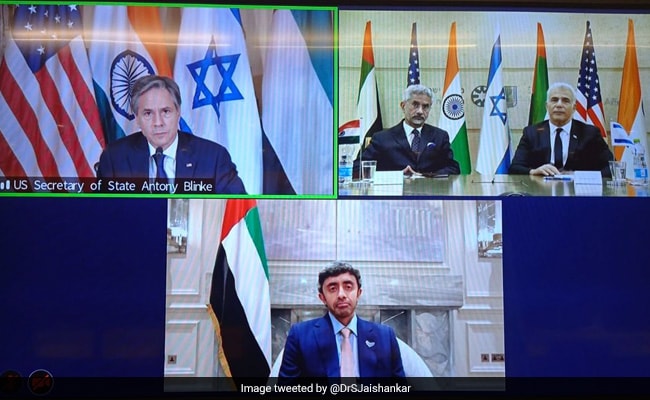 S Jaishankar met his counterparts from US, Israel and UAE over cooperation in Asia, Middle East

External Affairs Minister S Jaishankar had a "fruitful" first quadrilateral meeting with his counterparts from the US, Israel and the UAE on ways to expand economic and political cooperation in the Middle East and Asia, including through trade and enhancing maritime security.

Mr Jaishankar, who is currently on a five-day visit to Israel, was accompanied by the home nation's Foreign Minister Yair Lapid, during the virtual meeting on Monday. US Secretary of State Antony Blinken and UAE Foreign Minister Sheikh Abdullah bin Zayed Al Nahyan participated virtually as the four leaders also exchanged views on shared issues of concern in the region.

"A fruitful first meeting with Israeli APM and FM @YairLapid, UAE FM @ABZayed and US Secretary of State @SecBlinken this evening," Mr Jaishankar said in a tweet.

A fruitful first meeting with Israeli APM and FM @YairLapid, UAE FM @ABZayed and US Secretary of State @SecBlinken this evening.

Mr Jaishankar, in his brief comment, said, "the three of you are among the closest relationships we have, if not the closest".

He agreed with Antony Blinken that this kind of a forum could work much better than three different bilateral engagements, citing the fight against COVID-19 as an example of the benefits of such cooperative mechanisms where bilateral ties tend to fail.

"I think it is very clear that on the big issues of our times we all think very similarly and what would be helpful would be if we could agree on some practical things to work upon," Mr Jaishankar said.

State Department Spokesperson Ned Price in a statement said that Secretary Blinken and his three counterparts "discussed expanding economic and political cooperation" in the Middle East and Asia, including through trade, combating climate change, energy cooperation, and increasing maritime security.

The Foreign Ministers also discussed people-to-people ties in technology and science, and how to support global public health in relation to the COVID-19 pandemic, he said.

Secretary Blinken in a tweet said that the meeting discussed "shared issues of concern in the region and globally, and the importance of expanding our economic and political collaboration."

In his remarks, Mr Blinken described Israel, the UAE and India as three of "our most strategic partners".

He said by "bringing friends together in new ways, we are making these partnerships even greater than the sum of their parts".

"I think that is what this gathering is about. Sitting here in Washington I can say very simply that with Israel, the UAE and India we have three of our most strategic partners. And given so many overlapping interests - energy, climate, trade, regional security -- this seems like a really interesting and good idea to try and use this new format and very complementary capabilities in very many areas to just see many more things get done. That''s the idea," Mr Blinken said.

Mr Lapid, who is also Israel's Alternate Prime Minister, noted that "one of the things we are looking for is synergy, and that is what we will try and create after this meeting."

"Synergy which will help us work together in all the areas that preoccupies us. Around this table we have a unique set of capabilities, knowledge and experiences that can be used to create a network that we all want to create," Mr Lapid said.

The Israeli leader felt that the key to achieving what they were aiming at was quickly moving from government-to-government to business-to-business.

He emphasised on the need for this quadrilateral grouping to quickly put adequate mechanisms in place to translate efforts into real businesses around the globe.

UAE's Sheikh Al Nahyan thanked Mr Blinken and Mr Lapid for graciously "proposing the idea" of creating this kind of a forum to boost cooperation.

Talking about India, the UAE minister said, "Minister Jaishankar is an old friend, I could say, but also India and UAE have such a strong and diverse relationship."

Touching upon bureaucratic hurdles that often slow down such initiatives, Sheikh Al Nahyan suggested businesses should be surprised by opportunities and then it should be observed how the trading community responds, in terms of putting a robust plan forward.

Later, the four foreign ministers entered a closed discussion to draw a strategy to make this quadrilateral cooperative plan a reality.

Mr Price said that Secretary Blinken reiterated the Biden Administration's support for the Abraham Accords and normalisation agreements and discussed future opportunities for collaboration in the region and globally.

In August 2020, Israel, the UAE and the US signed Abraham Accords. The accord helped Israel and the UAE normalise their ties.

India had welcomed the agreement, saying it "has always supported peace and stability in West Asia which is our extended neighbourhood."

India and Israel elevated bilateral relations to a strategic partnership during the historic visit of Prime Minister Narendra Modi to Israel in July 2017.

Since then, the relationship between the two countries has focused on expanding knowledge-based partnership, which includes collaboration in innovation and research, including boosting the 'Make in India' initiative.