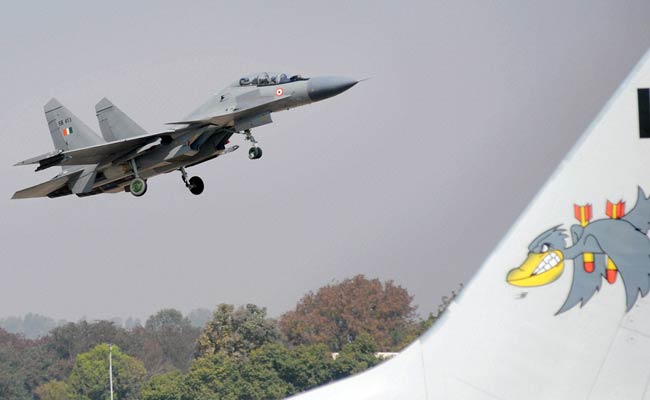 A Sukhoi Su-30 fighter aircraft takes off during the 2nd day of the AERO India 2015 at Yelahanka Air base. (Photo: Press Trust of India)

Did pilots of the Indian Air Force deliberately crash a perfectly functional Sukhoi Su-30 fighter by ejecting from the aircraft in October in Maharashtra last year? The incident had prompted the temporary grounding of India's entire Sukhoi fleet.

Mr Borodich was one of the Russian experts called in to help the Indian Air Force in its crash investigations; he has examined data from the flight data recorder of the jet.

Though Air Chief Marshal Arup Raha has ruled out a deliberate ejection by his pilots, months after the crash, he has no explanation for what happened.

The Air Force chief told NDTV, "There is nothing wrong with the [ejection] system but there is still no human error. The Court of Inquiry report will be out soon." Asked to clarify his seemingly contradictory statement, he said that this was a recurring problem with the Sukhoi aircraft.

The October crash made headlines last year after the Su-30 flown by Wing Commander Sidharth Munje and Flying Officer Anup Singh inexplicably crashed when it was on its final approach to land at the Lohegaon Airbase near Pune. The pilots were not injured; their parachutes deployed, once they ejected from the jet, leaving the pilot-less aircraft to fly into the ground.

This is not the first time that the Indian Air Force has run into trouble with its Su-30 fleet. In 2008 in Bareilly, an airman conducting ground tests on the Su-30 was killed when the ejection seat fired from the aircraft and last year, two pilots on an Indian Air Force Su-30 inexplicably ejected when the jet was taxing for take-off in Jodhpur. Both of them survived.

Like all modern ejection seats, the Sukhoi's Russian Zvezda K-36DM seat needs to be armed by lifting a lever to the side of the pilot. This is done when the aircraft is on the ground and is about to set off on a sortie. By arming the seats, the rocket under the pilot's seat is put in ready-to-fire mode. The rocket ignites if the pilot pulls the ejection handles located between his legs in the event of an emergency. Once the pilot does this, restraints pull the legs of the pilot to his chest,  the canopy of the aircraft shatters, and the ejection seat blasts out. The seat then separates automatically from the pilot and a parachute is deployed, bringing the pilot down to Earth safely.

Promoted
Listen to the latest songs, only on JioSaavn.com
Russian experts say there is no fault in the mechanism of the K-36DM seat which could have prompted an automatic ejection since the Indian Air Force has subsequently cleared its Sukhois for full flight operations.

India has a contract for 272 Sukhoi Su-30 jets from Russia, most of which are being manufactured at Hindustan Aeronautics Limited in India under a license from the Russian firm Irkut. The Indian Air Force is the world's largest operator of this type of fighter jet.