The organisation will organise an 'Eid Milan' programme in New Delhi on June 19, to which Muslim clerics and RSS leaders will be invited, National Convenor, MRM, Muhammad Afzal said. 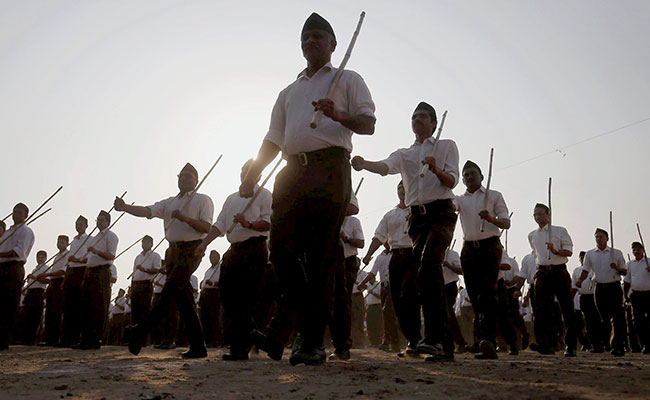 Guests from other countries and ambassadors will also be invited to the programme. (File)

New Delhi: Making an all-out effort to woo Muslims ahead of the 2019 Lok Sabha polls, the RSS-backed Muslim Rastriya Manch (MRM) is organising 'Eid Milan' programmes and Iftar parties to "remove misconceptions" among a section of people about the Sangh and the BJP.

The MRM also claims that it sponsors the education of over 2,000 Muslim children and doles out a pension of Rs 1,000 per month to women who were given 'talaq'.

The organisation will organise an 'Eid Milan' programme in New Delhi on June 19, to which Muslim clerics and RSS leaders will be invited, National Convenor, MRM, Muhammad Afzal told PTI.

"Guests from other countries and ambassadors will also be invited to the programme during which the MRM will try to remove misconceptions related to the RSS and the BJP," he said.

Mr Afzal said RSS chief Mohan Bhagwat was also invited to the event, but he is expected to give it a miss due to other engagements.

The MRM has been hosting Iftar parties at a number of places. RSS leader Kumar Indresh attended some of them.

"The Iftar parties were organised in Mumbai and Dehradun. More such events will be held in Meerut and Pune this week," he added.

The MRM is reaching out to Muslims, informing them about the works of the RSS and trying to change their views about it, Mr Afzal said.

"We are bearing the cost of education of over 2,000 Muslim children. A pension of Rs 1,000 per month has been started for women, who were given talaq. At present, a thousand women are availing it," he said.

The organisation claims it has set up "foodgrain banks" for the poor.

The MRM has established a trust to provide free education to meritorious students. It has been named after freedom fighter Ashfaqullah Khan, he said.

The RSS's Muslim wing had last year organised Iftar parties and served cow milk and its products to drive home the message of 'save the cow' and that consumption of its meat invites diseases.

Special prayers were offered in which appeals were made to protect the cow.

The MRM was formed in 2002 by then RSS chief KS Sudarshan to allow the Sangh to reach out to Muslims.
Comments
RSSMuslim Rastriya Manch