RSS chief Mohan Bhagwat is expected to deliver a keynote address at the event that will be "strictly confidential" and "not open for coverage". 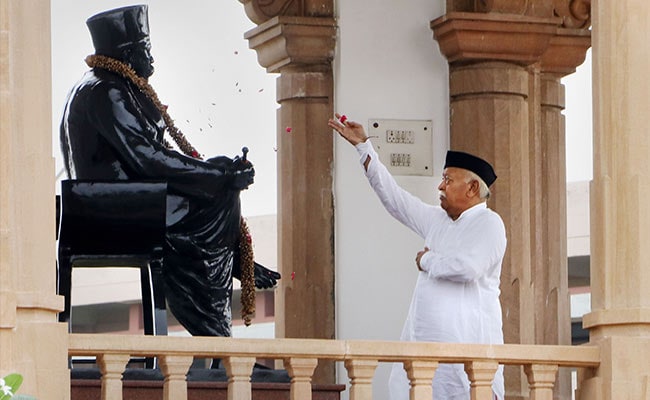 In a major image makeover endeavour, the Rashtriya Swayamsevak Sangh or RSS is expected to host a rare interaction with members of the international media later this month. The aim, a source said, is to give out the "right perspective" about the organisation which is the ideological mentor of the ruling BJP.

"International journalists are often a victim of their own organisation's prejudice. Even if they want to give the right perspective, they are unable to. An event, hosted with the intention to give out the right perspective is very important," a senior RSS functionary told NDTV on the condition of anonymity.

The event is expected to be held in Delhi's Ambedkar International Centre. It is expected later this month. "A date is yet to be finalised," the RSS functionary said.

Sources have told NDTV that 70 foreign journalists posted in India and editors of foreign TV channels and newspapers will be invited to the event.

RSS chief Mohan Bhagwat is expected to deliver a keynote address and then it will be followed by a free-flowing conversation. The proceedings will be "strictly confidential" and "not open for coverage".

It is expected that the RSS will cover a whole host of subjects at the event.

These include reasons why Jammu and Kashmir's special status had to go, clarifying the RSS' position on reservation, why India needs to talk tough to Pakistan, why RSS believes in the world is "one family", the need for a uniform civil code, why it opposes secessionist voices attempting to weaken the country, freedom of speech and expression but not at the cost of hurting national interest.

One of the main topics of discussion will be terrorism and why strong arm tactics are the only way to deal with it.

This one-of-a-kind meeting seems to be a conscious effort on the part of RSS to reach out to a wider audience and counter critics like the opposition Congress which accuse it of promoting a culture of intolerance underpinned by majoritarianism.

Last June, in a similar effort, the RSS had invited former President Pranab Mukherjee, a Congress veteran of five decades, to address thousands of RSS volunteers at its headquarters in Nagpur.

Then, in September, the RSS chief Mohan Bhagwat addressed a three-day lecture as part of the organisation's outreach initiative.

While it was widely covered in the India media, there was hardly any mention of in the international press.

Mr Bhagwat had led this initiative by meeting diplomats as a part of this outreach.

He also hosted German Ambassador Walter Lindner this July at the RSS headquarters in Nagpur.

The RSS has plans for more such outreach related events in the next few months, sources said.