The racket was uncovered by FCORD, a Home Ministry wing dealing fake Indian currency notes, frauds, and terror financing, among other things. 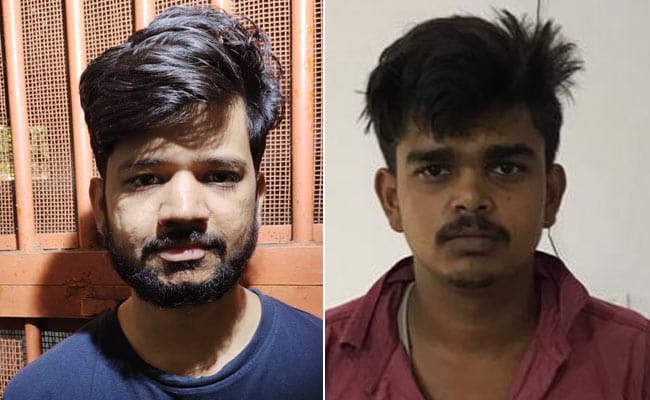 The alleged masterminds of the racket: Hukum Singh Bisen (Left) and Sanjay Mahto.

An online racket that has defrauded around 800 people of Rs 20 crore in the past year or so has been busted by the Union Home Ministry, teaming up with several state police departments. Eight persons have been arrested across multiple states while hundreds more have either been rounded up or are under surveillance. The gang invested a considerable portion of it loot on smartphones which were later sold in the grey market.

The financial fraud, spanning 18 states and Union Territories, was uncovered by FCORD, an in-house resource of the Ministry, in association with several state police departments. FCORD deals with
fake Indian currency notes, frauds, and financing of terror, among other things.

"A joint operation...has led to the arrest of eight scamsters who defrauded around 800 people of about Rs 20 crore in the past 6-12 months," a senior Home Ministry official disclosed to NDTV. Up to 300 more associates have been identified in various states, he said.

Two persons, Hukum Singh Bisen of Madhya Pradesh's Balaghat and Sanjay Mahto of Jharkhand's Deogarh, have been identified as masterminds of the racket. Bisen is an civil service aspirant and worked as an Indian Railways engineer. Till now, two accused from Madhya Pradesh and Andhra Pradesh, besides four from Jharkhand, have been arrested.

"The racket ran in many tiers. An initial probe reveals that Sanjay Mahto was one of the callers who used to induce the public," an officer explained.

The case came to light on June 11 after a 78-year-old Udaipur resident complained on the FCORD-run CyberSafe app that he had lost Rs 6.5 lakh online.

CyberSafe was launched in August 2019 and links 18 fintech entities, in real-time, with over 3,000 law enforcement authorities, including the police, in 19 states and Union Territories.

The app revealed that the funds swindled from the elderly person were directly credited to three SBI debit cards. These cards were then used to buy 33 expensive China-made Xiaomi POCO M3 mobile phones on Flipkart. These handsets, along with other items, have been seized from Bisen in Balaghat.

"These people invested in mobiles as they are very popular and in demand and can only be bought from sites and not from any retailer," explained Abhishek Tiwari, the Balaghat Superintendent of Police.

"The gang members bought these phones for about Rs 10,000 each and sold them in the black market at 5-10% discount," he said. Even after the concession, each unit fetched them considerable profit since these were bought in bulk during online sales.

The Jharkhand police then arrested the person whose fraudulent call led to the Udaipur resident losing money.

Subsequent police raids across states led to recoveries of around 900 more cellular phones. Around 1,000 bank accounts and hundreds of UPI and e-commerce IDs of the gang members have been identified and are under investigation, while nearly 100 bank accounts and debit and credit cards have already been frozen.

"Fraudster's mobile numbers are the key to CyberSafe. As soon as a victim informs the police, the information is entered on CyberSafe and in real-time, the fund flows are identified and communicated," a senior Home Ministry official said.

Till now some 65,000 phone frauds have been reported on the app and 55,000 phone numbers and several thousand bank accounts of fraudsters identified, according to him. "The app is not open to common people as many can do mischief that's why access has only been given to law enforcement agencies," he adds.