Row Over New Surf Excel Ad; On Twitter, Praise Amid Calls For Boycott

The Hindustan Unilever brand was trolled with the hashtag #BoycottSurfExcel by what appears to be a section of hardliners. 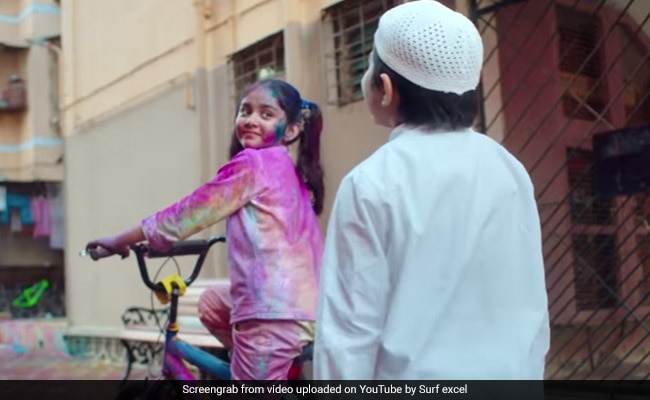 The Surf Excel ad trended for the wrong reasons as tweets called it "Hindu-phobic''.

Detergent brand Surf Excel, known for its heart-warming ads, was caught in a Twitter flap over its latest campaign, revolving around the Holi festival and Hindu-Muslim friendship. The Hindustan Unilever brand was trolled with the hashtag #BoycottSurfExcel by what appears to be a section of hardliners.

With the theme "Rang Laaye Sang" or colours that bring us together, the one-minute ad shows a young girl dressed in white goading children to splash her with Holi colours until they run out. When the children have no more colours left, the girl motions an all-clear to her Muslim friend, dressed in a crisp white kurta, and takes him to the mosque for prayers. "Later it's your turn to get sprayed with colours," she tells him.

Then comes the famous tagline - "Daag acche hain" (stains are good, especially for a good cause).

Many have praised the ad, released on February 27, for its message of religious harmony. The video has already gathered around 7,740,000 views on YouTube.

On Sunday, the ad trended for the wrong reasons as tweets with the hashtag #BoycottSurfExcel called it "Hindu-phobic'' and "controversial".

However, many positive tweets countered the hate spewing.

To the Bhakts. You have no idea how much Surf your outrage helped sell....congrats 🙂 You're practically the new brand ambassadors.

What an Advertisement .... With an Amazing message on #Holi by Surf Excel... My Salute to you 👍.
Must watch n Do share ... #HappyHoli#India
pic.twitter.com/fMKKrv2oBW

I am buying 2 extra 2 kilo pack of #SurfExcel for reminding us that we are nice people. And live naturally in relative harmony. And, kids know no barriers, until they are taught.
It will last me 6 months. but it is worth it to defeat haters.

Earlier this year, Hindustan Unilever faced a controversy over a Kumbh Mela-themed ad in which a son contemplates abandoning his aged father in the crowd, but soon realises his mistake and comes back to him. Soon after the ad was shared on the company's twitter handle, some criticized it saying it "hurt sentiment" and portrayed the major religious event in wrong light.