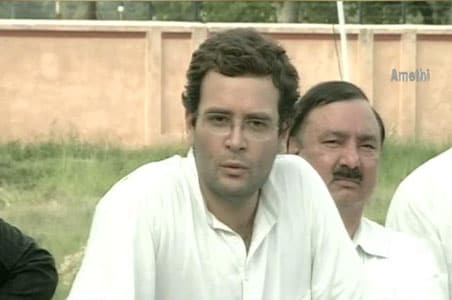 A day after the arrest of the Uttar Pradesh Congress chief Rita Bahuguna Joshi for her remarks against Mayawati there was a counterattack from Congress General Secretary Rahul Gandhi, the leader largely credited with being responsible for the Congress's dramatic turn around in Uttar Pradesh.

Rahul Gandhi called Rita Joshi's words against Mayawati deplorable, but said the reasons for her anger are justified.

Perhaps concerned that Rita Joshi's remarks may have an adverse effect on the party in UP. Rahul counterattacked by stating that Mayawati only has time for her statues not for people and spoke of the need for Congress to come to power there.

"There is place for statues and elephants (BSP symbol) but there should also be space for development and electricity," Gandhi said, in an apparent reference to the controversy over erection of memorials for Kanshi Ram and statues of Mayawati in different parts of the state, spending huge sums of public money.

On a thanksgiving visit to his constituency, the first after the Lok Sabha poll victory.

As for Mayawati, on Friday she made it clear that Congress leader Rita Bahuguna Joshi's remarks against her will not be forgiven and action will be taken against her under the provisions of the strongest SC ST Act.

Mayawati also said that Sonia Gandhi's apology on Thursday was made under duress and should have come earlier. (With PTI inputs)