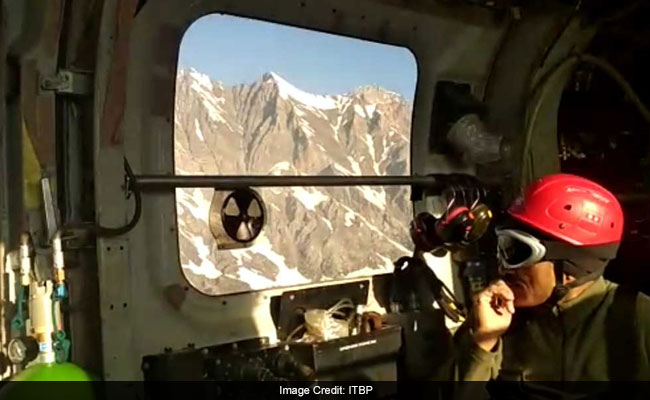 On Monday, an IAF helicopter had spotted five bodies; the status of other three climbers is not yet known

A joint operation between the Indian Air Force and the Indo-Tibetan Border Police (ITBP) to recover the bodies of five climbers believed killed in an avalanche in the Himalayas has been postponed for 10 days. A statement released by the ITBP attributed the delay to technical and weather-related issues.

A team of four ITBP trekkers and five IAF personnel took off from Munsyari village in Uttarakhand in an Advanced Light Helicopter (ALH) and attempted three sorties, starting at 4.50 am today, but the aircraft was hindered by turbulent winds, the risk of further avalanches, the bowl-shaped terrain, the high altitude and the fact that there was only one possible approach route to the site.

"When a chopper enters into such places, they have to also consider a return path, which was unavailable in this case, so the pilots decided not to take any risk," district magistrate Vijay Kumar Jogdande was quoted in an AFP report.

The ITBP statement also said mountaineering teams involved in the retrieval of the climbers' bodies would undertake a ground mission only after "proper acclimatisation" to the weather conditions; that process usually takes between six to eight days. There is also the danger of another avalanche in the area, which poses a risk to the operation, an ITBP official was quoted in a Reuters report.

On Monday, an IAF helicopter spotted five bodies partially buried in snow; the status of the other three climbers is not yet known but officials have said chances of their survival are remote.

Eight climbers - four from Britain, two from the United States and one each from Australia and India - were reported missing last Friday after they failed to return to their base camp near Nanda Devi, India's second highest mountain.

The team, led by experienced British climber Martin Moran had permission only to climb Nanda Devi but a Facebook post by Moran's mountaineering firm on May 22 said that they planned to attempt "an unclimbed peak" around 6,500 metres (21,300 feet) high.

The group communicated last on May 26, a day before heavy snow fell and massive avalanches hit the heights.

A major search operation including two helicopters, drones and dozens of mountain rescuers has been ongoing. However, they have been hampered poor weather and the remoteness of the area.

Authorities were able to reduce the search area to roughly 50 square kilometres (20 square miles) following information from four British climbers rescued on Sunday from the Nanda Devi base camp.

This has been one of the deadliest climbing seasons in the Himalayas for several years; 11 people died on the slopes of Mount Everest alone. The world's highest peak has seen several fatalities this year due to poor weather conditions, inexperienced climbers and overcrowding.

Nanda Devi, at 7,816 metres (25,643 feet), and its sister mountain, Nanda Devi East, are among the world's most challenging peaks and only a handful of people have climbed them

With input from agencies