Allahabad: Retired sub-inspector Abdul Samad Khan, 70, falls to the ground and tries to shield himself as he is beaten to death by three men

Allahabad: Abdul Samad Khan, 70, is left sitting against the wall, critically wounded, as the men escape

A retired policeman was assaulted with sticks by three men on a street in Uttar Pradesh's Allahabad until he lay motionless, bleeding, one arm almost mutilated. For seemingly interminable moments, no one on the road stopped to help 70-year-old Abdul Samad Khan, who died in hospital.

The savage attack, which took place on Monday morning, was caught on CCTV. Mr Khan, a retired sub-inspector, is seen with his bicycle when a man in a red shirt comes and starts beating him.

Mr Khan falls to the ground and tries to shield himself but the blows keep coming. Another man is caught watching the scene from a terrace. In the 40-second clip, several pass by on cycles and two-wheelers, slow down to look and leave. 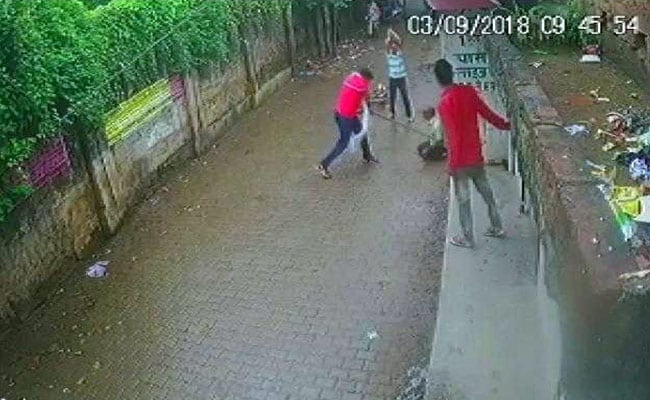 Mr Khan is left sitting against the wall, critically wounded, as the men escape. One of the attackers is a notorious criminal with a prison record.

Mr Khan was later taken to hospital where visuals showed him on a bed with a mask on his face.

The main attacker is believed to be a man named Junaid. Reports say he has at least 10 criminal cases against him at the local police station. Another accused, Mohd Yusuf, has been arrested.

The retired policeman's brother, Abdul Wahid, said the accused is a land-grabber and wanted to occupy a piece of land owned his brother. "Many in our locality have complained to the police about him in the past but there has been no action. He continues to threaten people in the area and act with impunity," Mr Wahid said.

The Allahabad police says initial investigations suggest a property dispute with relatives. Ten people have been named in the First Information Report (FIR) filed at the local police station.

The Allahabad High Court has told the police to give a report within 24 hours, news agency ANI reported. It asked the police why the other two accused have not been arrested despite being clearly seen on CCTV.

Mr Khan retired from the Uttar Pradesh police in 2006.