Read inOther Languages
This Article is From Jan 26, 2019 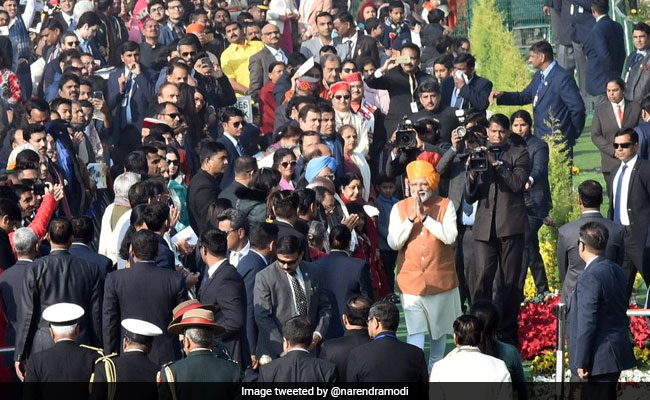 Republic Day 2019: Many rushed to greet PM Modi, others captured the moment on their cellphones.

Prime Minister Narendra Modi broke security cordon to walk up to the crowds lining Delhi's Rajpath and greet them at the end of a dazzling parade celebrating India's 70th Republic Day. Amid chants of "Modi, Modi", the Prime Minister - dressed in traditional kurta, pajama and jacket and sporting a yellow and red turban -- walked the length of the VIP enclosure, waving to the crowds at the last big state function before the general elections due by May.

Many rushed to the makeshift barricades to greet him, others captured the moment on their cellphones.

This was not the first time the Prime Minister has broken security cordon to greet the people. After last year's Independence Day speech from the ramparts of the Red Fort, he had walked over to meet school children who had come for the occasion.

Television cameras at the venue captured ecstatic children rushing around him to shake his hands and click an occasional selfie.

The Prime Minister had even broken security cordons on his many visits abroad, often outside hotels where he lodged.

This morning, PM Modi was among the first to greet the people on the Republic Day. "Happy Republic Day to all fellow Indians," his tweet read.

Ahead of the celebrations at Rajpath he visited the Amar Jawan Jyoti, a memorial to martyred soldiers at the India Gate, accompanied by Defence Minister Nirmala Sitharaman and the three service chiefs.

The spectacular parade was marked by a grand military parade, cultural programme by school children and the majestic fly past by the Indian Air Force. This year's parade was themed on the 150th birth anniversary of Mahatma Gandhi. Tableaux from many states captured the various phases from the life of the Father of the Nation.

No Bail For Aryan Khan In Drugs-On-Cruise Case, Next Stop High Court