According to a report released by HelpAge India, 20.8 per cent of the surveyed elders lost their family members or friends due to Covid-19.

Dhanesh Chandra Sharma, 88, has no hopes left after his 54-year-old son died in front of his eyes on May 1.

At the time, Delhi was in the throes of a deadly second wave of Covid infections and people were scrambling to arrange hospital beds and oxygen cylinders. So when Mr Sharma's youngest son Sanjeev, a dentist with a clinic of his own, fell ill, the elderly man could not arrange for an ambulance to rush him to a hospital.

"I tried to get an ambulance for him but could not, because the last week of April and the first week of May was the worst time for any resource, whether it is oxygen or ambulance. He died uncared for. I could not even lift his body because I am 88. He was healthy," recounted Mr Sharma. He added that an NGO helped arrange Sanjeev's cremation.

Mr Sharma's two other sons are settled in the US and Canada and his wife died 13 years back. Sanjeev's death has now forced the retired agricultural scientist to vacate his home and move to an old age home in south Delhi.

"I lived with Sanjeev at my house in east Delhi's Yojna Vihar. I had built that house with my life's savings. My wife had sold all her ornaments for it. Today it lies abandoned and has been ransacked by thieves multiple times. I have registered a police complaint but there is nothing more that I can do. I can't go and live there alone," he said.

According to a report released by HelpAge India today to mark "World Elder Abuse Awareness Day", 20.8 per cent of the surveyed elders lost their family members or friends due to Covid-19.

The study, titled "The Silent Tormentor: Covid 19 and the Elderly", has surveyed 3,526 people across six cities -- Delhi, Mumbai, Bengaluru, Hyderabad, Kolkata and Chennai.

As many as 62.1 per cent of the senior citizens feel the pandemic has increased the risk of elderly abuse.

The main abusers, according to the report, were sons (43.8 per cent) and daughters-in-law (27.8 per cent). As many as 14.2 per cent said that their abusers were their daughters.

Satwant Mathur, a retired professor, has been living in an old age home for over six years now. She is 93 and always looks forward to life, but the pandemic broke her spirit.

She said, "It is this feeling of helplessness. You cannot even sit with your friend and console her after she has lost her husband. I called up my friend at 11.30 pm and she was howling because she was getting calls every half an hour from the hospital that her husband's condition was sinking.There was nothing I could do. I was so depressed. I was asking basic questions. Is there anyone listening to the pain, agony and mourning of these people?"

Neelam Mohan, who runs Panchvati Old Age Home in south Delhi, said, "In our community, women do not go to cremation grounds. But when Aruna Ji, a 91-year-old woman who used to live with us passed away in August 2020, we all carried out her final rites. These people become like family to us. We cannot leave them midway." 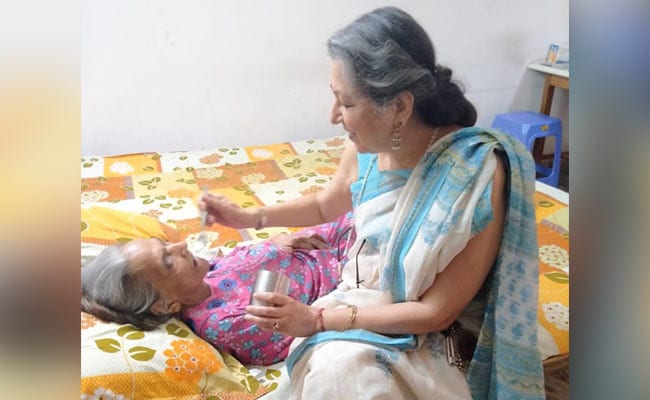 Neelam Mohan, who runs an old age home, with 91-year-old Aruna Deva during her last days.

Rohit Prasad, CEO of HelpAge India, said, "What is heart-wrenching about this report is that the senior citizens have always been counted as the most vulnerable to Covid-19 when it comes to physical health but very little attention has been paid to their mental health. There is a very deep sense of worry and loneliness among them."