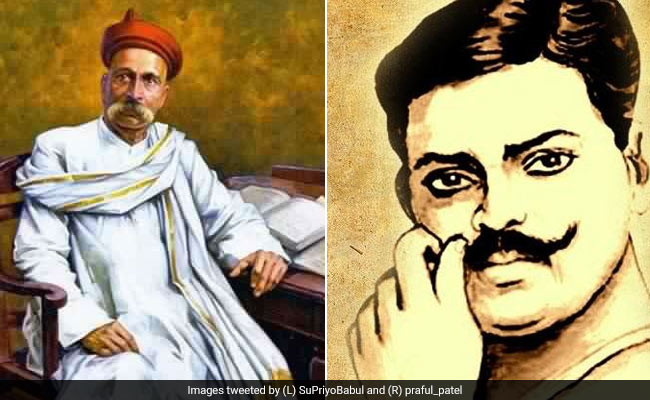 I feel that present-day youth must read about their lives and sacrifices made for country's freedom.

Defence Minister Rajnath Singh, in his tribute to Chandra Shekhar Azad, described the freedom fighter as "the heroic son of Mother India and the immortal revolutionary...His name inspires Indians to die for the country. I bow down to Chandra Shekhar Azad, who sacrificed his life for the freedom of the country!" Remembering Lokmanya Bal Gangadhar Tilak, the Defence Minister said, "...He was a true patriot who envisioned the idea of Independent India."

I bow to Lokmanya Bal Gangadhar Tilak on his birth anniversary. He was a true patriot who envisioned the idea of Independent India.

Lokmanya Tilak was a towering personality, blessed with immense wisdom. His contribution to India's freedom movement will always be remembered.

I join a grateful nation in paying homage to the revolutionary freedom fighter Chandra Shekhar Azad Ji on his birth anniversary.

His life & love for motherland continue to inspire every Indian.

Pay my tributes to the revolutionary freedom fighter #ChandrashekharAzad ji on his birth anniversary. He sacrificed himself so that we all could breathe in the air of freedom. His courage and fearlessness will continue to inspire generations to come. pic.twitter.com/7R2wDqCK1r

Maharashtra Chief Minister Uddhav Thackeray paid his respect to Bal Gangadhar Tilak and spoke about the freedom fighter taking on the British regime fearlessly with his pen. Tilak was a prolific writer and started two weeklies called 'Kesari' in Marathi and 'Mahratta' in English. State BJP chief Chandrakant Patil paid his tribute to Bal Gangadhar Tilak, describing him as a "great social reformer, philosopher and writer."

Chandra Shekhar Azad's call for freedom was immortalised by his slogan -"Dushman ki goliyon ka hum samna karenge, Azad hi rahein hain, azad hi rahenge" which means, "We will face the bullets of enemies. We were free and we will remain free."

Lokmanya Bal Gangadhar Tilak was one of the strongest proponents of 'Swaraj', meaning self-rule. He tirelessly contributed towards driving India free from colonial rule. His famous line, "Swaraj is my birthright and I shall have it," reverberates even today.